‘Unnecessary’ US emissions to cause $1trn damage to global economy

Decades of federal ‘gridlock’ mean US is way behind on commitments, report reveals

October 15th, 2018: In an interview with 60 Minutes on CBS US president Donald Trump has backed off his claim that climate change is a hoax but said he does not know if it is man-made. Video: CBS / 60 Minutes 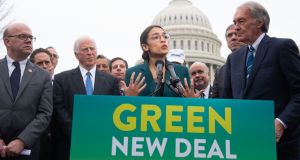 Alexandria Ocasio-Cortez, Democrat of New York: The Green New Deal is a proposal offered by progressive Democrats that would dramatically shift the United States away from fossil fuels toward renewable energy. Photograph: Saul Loeb/ AFP/Getty Images

Three decades of federal “gridlock” in the US on reducing carbon emissions will cause $1 trillion in damage to the global economy, a report by the Institute of International and European Affairs (IIEA) has estimated.

The overall gap to targets agreed by the US in landmark global deals on countering global warming at Rio de Janeiro in 1992, Kyoto in 1997, Copenhagen in 2009 and Paris in 2015, is already in the region of 20 billion tons of CO2, it concludes.

Another five billion tonnes in excess of the Paris agreement target will be released between 2018 and 2025 (based on current trends), the report finds – equivalent to total greenhouse gas pollution from China, the EU and India in 2018.

Report authors Joseph Curtin and Max Münchmeyer define the gap between emissions and commitments made since 1992 as “unnecessary emissions”. This shortfall and quantification of damages “risks opening a Pandora’s box of moral, legal and political conundrums”, Mr Curtin said.

“By the end of 2016, president [Barack] Obama believed the US had become a global leader in the fight against climate change. He was right: the country was then on a pathway consistent with meeting its Paris agreement objectives,” he said.

Since then, however, emissions growth resumed in 2018 amid the Trump administration’s single-minded determination to roll back Obama-era climate protections, he added, and the prospect of meeting this pledge has quietly receded. “Our report situates this act within an historic pattern: one step forward, one step back again.”

The report finds all targets agreed to by successive administrations – from those of George HW Bush to Mr Obama – were “eminently achievable” but “legislative gridlock” rendered them unreachable.

– Partisanship: perspectives on climate action have become increasingly sorted according to tribal loyalty since the early 1990s;

– Senate procedure: Senate rules exacerbate gridlock by enabling the Republican Party to build a blocking coalition, even when it has had no political power from 1991 to 1993 and 2009 to 2011; and

– The power of special interests: the importance of fossil fuel interests in undergirding gridlock though influence over key decision makers and the wider public debate.

As presidential candidates begin setting out their climate policy platforms and debating options for federal legislation, the authors favour a new approach to determining “moral responsibility” on emissions.

“A country’s historical contribution to global emissions has commonly been used as indicators of ‘responsibility’ for climate change,” Mr Curtin said.

However, “some argue that the current generation should not be accountable for the actions of its predecessors, and we therefore use ‘progress to targets’ as an alternative way of looking at moral responsibility, because few would argue that a country shouldn’t keep its promises, at the very least”.

The IIEA report also considers whether moral responsibility can be translated into legal liability, and if so, against whom. It finds lawsuits are already being advanced against the federal government, which failed to advance legislation, but also against corporate interests “that undergirded gridlock”.

According to Mr Münchmeyer, there are several potential legal avenues of recourse. “While actions before international judicial bodies such as the International Court of Justice are unlikely to be successful in the near term, domestic courts offer the brightest prospects.”

He added: “Lawsuits are already being advanced against federal and state governments, as well as against private corporations, but a key challenge remains to link emissions from one source to specific environmental damage or personal harm.”

Recent advances in climate science, however, along with several promising legal precedents from around the world “increase pressure on the American legal system to re-engage with the constitutional, human rights and environmental questions arising from climate change damage”, he noted.

On prospects for a political resolution, if legal avenues offered little chance of short-term success, Mr Curtin said: “What is clear is that with every year that passes, the impacts of climate change become more devastating, and calls for a political response become louder from a large and growing majority of Americans.”

Three decades of climate history suggested a window of opportunity for legislation “be it delivering a ‘green new deal’, a carbon fee, or an alternative approach” would eventually open again. If this does not happen in 2021, the focus would again turn to litigation.

“Someone, somewhere, at some time, will eventually pay the price,” he predicted.