Theresa May summons her cabinet to five-hour meeting on Tuesday 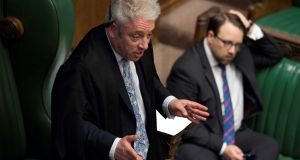 Speaker of the House of Commons John Bercow, who chose four options for debate on Monday. Photograph: Jessica Taylor/AFP/Getty Images

Theresa May has called her cabinet to a five-hour meeting on Tuesday – more than three times the usual length – to discuss the next steps on Brexit following MPs’ latest round of indicative votes on alternatives to her deal. Ministers will meet in the morning for three hours without officials to discuss political options before meeting in their regular formation for two hours after lunch.

Conservative MPs were given a free vote in the indicative voting on Monday night, although cabinet ministers were told to abstain on all the options.

Speaker John Bercow chose four options for debate: a permanent customs union; common market 2.0 which would see Britain remaining in the single market and customs union; a confirmatory referendum on any deal approved by parliament; and a revocation of article 50 rather than leaving with no deal if the EU refuses to delay Brexit further.

Labour whipped its MPs to vote for all the options apart from the revocation of article 50, declaring that it was seeking a compromise that could win a majority in parliament.

“In line with our policy, we’re supporting motions to keep options on the table to prevent a damaging Tory deal or no-deal, build consensus across the House to break the deadlock and deliver an outcome that can work for the whole country,” a party spokesman said.

DUP Brexit spokesman Sammy Wilson said his party could not support any of the motions because they did not fulfil the criteria of protecting Northern Ireland’s place in the United Kingdom and delivering on the 2016 referendum result.

“The EU have made it quite clear that where there is uncertainty, they will require that the backstop be in place and indeed the withdrawal agreement makes it clear that even if the backstop were to be removed it could be in all or in part,” he said.

While MPs debated the procedure for the indicative votes, a group of seminaked climate change protesters glued themselves to the glass panel separating the public gallery from the Commons chamber. Police officers removed the demonstrators after about 30 minutes and the protest did not interrupt the debate.

Conservative Dominic Grieve, who advocates a second referendum, warned MPs against choosing a course of action that would see Britain leaving the EU within a few weeks after a short extension to article 50.

“I think the House has got to be very careful about simply jumping on something which it thinks we can all agree with without thinking through the consequence of the process. And making sure that process can satisfy the House itself and the electorate, and lead to the right outcome,” he said.

EU leaders meet in Brussels on April 10th and Britain will leave without a deal two days later unless MPs back a Brexit deal or Theresa May requests a long extension, which requires the unanimous approval of all member states.

In an interview broadcast on the BBC on Monday night, chief whip Julian Smith said the outcome of the 2017 general election made a softer Brexit inevitable.

“The government as a whole probably should just have been clearer on the consequences of that. The parliamentary arithmetic would mean that this would be inevitably a softer type of Brexit.”