Brexit: Latest round of ‘indicative votes’ fails to find a way forward

Speaking in Brussels, the EU’s chief negotiator Michel Barnier says there has to be a “positive vote” by the House of Commons in order to avoid a cliff-edge Brexit on April 12th. Video: Reuters 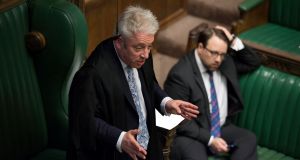 House of Commons speaker John Bercow is pictured during a debate on a series of indicative proposals tabled in an attempt to find consensus among MPs on Brexit. Photograph: UK Parliament/Jessica Taylor/PA Wire.

British prime minister Theresa May could bring her Brexit deal back to the House of Commons this week after MPs last night rejected four other options, including a customs union and a second referendum.

“If the House were to agree a deal this week it may still be possible to avoid holding European parliamentary elections. Cabinet will meet in the morning to consider the results of tonight’s vote and how we should proceed,” he said.

Speaker John Bercow selected four options for debate, down from eight last week, with MPs allowed to vote for as many as they wished. They rejected a customs union by 276 votes to 273, a majority of three, and a proposal to put any deal to a confirmatory referendum by 292 votes to 280, a majority of 12.

The DUP voted against all four motions and deputy leader Nigel Dodds said it was not too late for Mrs May to seek changes to the backstop.

“There is still an opportunity for the prime minister and the government to prosecute the issue which has bedevilled her withdrawal agreement throughout, the backstop. And that issue still needs to be addressed and if it is addressed then we can be in business,” he said.

Mrs May has called her cabinet to a five-hour meeting on Tuesday – more than three times the usual length – amid speculation that she could seek a long delay to Brexit in order to call a general election if she cannot win a majority for her deal. Ministers will meet in the morning for three hours without officials to discuss political options before meeting in their regular formation for two hours after lunch.

EU leaders meet in Brussels on April 10th and Britain will leave without a deal two days later unless MPs back a Brexit deal or the prime minister requests a long extension, which requires the unanimous approval of all member states.

Guy Verhofstadt, the European Parliament’s Brexit co-ordinator, said after the votes at Westminster that a no-deal Brexit was now “nearly inevitable”.

Taoiseach Leo Varadkar is expected to make the case for a long extension when he meets French president Emmanuel Macron in Paris on Tuesday and German chancellor Angela Merkel in Dublin on Thursday.

Government sources rejected claims that the Taoiseach is under pressure from Europe’s two most powerful leaders to outline how Ireland will deal with the Border if Britain leaves the EU without a deal.

They acknowledged that the meetings in the coming days will see Mr Varadkar discuss how to both protect the EU single market and keep the Border open in the event of a no-deal Brexit.

EU sources said this could include checks, in customs for example, away from the Border – such as in places of origin or destination, or at locations such as Dublin Port.