Analysis: A second Trump victory in 2020 would confirm the world’s worst fears 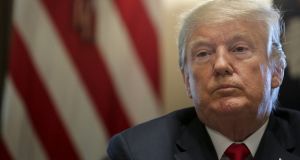 US president Donald Trump: a win for him in 2020 would signal that the US has permanently altered its character. Photograph: Oliver Contreras via Bloomberg

Any other president would be singing from the rooftops about rising US growth. In less than three months, Donald Trump’s Republicans could lose control of Congress. Yet Trump is focusing on anything but the economy.

Whether he is fretting over the trial of his former campaign manager, branding the media as enemies of the people, or escalating his purge of the so-called deep state, Trump cannot stick to the midterm script. The question is where this will lead him.

The end point is not a pretty one. Two events will dictate the second half of Trump’s term. The first is the conclusion of Robert Mueller’s investigation. Trump’s lawyers fear he is in a dilemma: if he refuses to be questioned by Mueller, that implies guilt; if he agrees, that entails a huge risk of perjury – both roads lead over a cliff.

The second is the likely Republican defeat in November. A Democratic takeover of the House of Representatives, and possibly the Senate, will push Trump to where he is most comfortable: running against the swamp.

Railing against Washington – whether it be a Democratic Congress, the growing band of disloyal former Trump loyalists or the federal bureaucracy – would offer a springboard for Trump’s 2020 re-election campaign.

Democrats crave a shellacking for the president in November. But Trump’s isolation would also play to his strength, which is to campaign rather than to lead. At a minimum, Democrats would use their subpoena power to expose the Trump administration’s dizzying conflicts of interest. They could tie him up in knots for the rest of his term. At the most, they could embark on impeachment.

US politics has been trapped in the permanent campaign for decades. With every cycle, the next election appears to start earlier. The outcome in 2020 will be more critical for the world’s future than any election in modern history.

Many people still attribute Trump’s 2016 win to a series of accidents. Hillary Clinton was an uncommonly easy target. James Comey was an unusually inept FBI director. The country was unprepared for the fog of fake news, both Russian-supplied and homegrown. Moreover, Trump lost the popular vote by more than 3 million. The quirks of the electoral system twisted in his favour. More than anything, Trump wishes to remove that stigma.

A second Trump victory would confirm the world’s worst fears. It would signal that the US has permanently altered its character. Having seen Trump in action, America wanted more of it. The post-America world would hasten into being. Democrats know this. They also know that the way Trump thinks he can pull this off is by branding them as enemies of the people.

Party leaders also sense that Trump could profit from impeachment much as Bill Clinton did in 1998. The deeper the toxic gridlock in Washington, the more Trump would stoke demand for authoritarian leadership to smash through it. His rhetoric points to that kind of campaign. Brace yourselves. It is already starting.

That brings us back to the economy. Why would Trump distract from its success? The stock market is high. Growth could exceed 3 per cent in 2018. Unemployment is at near-historic lows.

But that is not enough. Much of today’s growth is the temporary result of last December’s tax cut. Its effects will recede.

The chances of a recession before 2020 are rising. Besides, most Americans are not feeling today’s boom. The tax windfall has led to a surge in share buybacks and executive pay. It has not fed through into real wage increases. Nor has it brought back serious manufacturing jobs. Most of the labour market’s growth is in the low end service sector.

That is why Trump is focusing on tariffs as the elixir of American greatness. He posts tweets about tariffs as much as he fumes about fake news. He will add two more to his enemies list: China and the US Federal Reserve. The first is responsible for gutting the US economy. Expect Trump to target all Chinese imports by November. The second is taking the punch bowl away just as the party is starting. By 2019 the Fed will be an honorary member of the deep state.

Any other president would be trying to build on a strong economy. They would also be preparing to govern from the centre after a midterm defeat. But Trump’s story is driven by betrayal. His politics lives by that narrative and will eventually die of it. The question is what else he will take down with him. – Copyright The Financial Times Limited 2018