Over 300 dead in Kerala floods as India reels from monsoon

Worst flooding in state in a century sparks humanitarian crisis, with 223,000 homeless

Officials in the southern Indian state of Kerala say over 250 people have been killed since late May as floods ravage the region. Video: Reuters 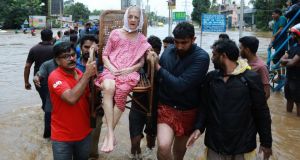 Volunteers and rescue personal evacuate people in a residential area in Ernakulam district, in the Indian state of Kerala, on Friday. Photograph: AFP/Getty Images

At least 324 people have died in India’s southern Kerala state over the past week due to severe monsoon flooding, the worst in the state for over a century.

The office of state chief minister Pinarayi Vijayan issued a new “red alert” on Friday, warning of more rain in 13 of the province’s 14 districts over the weekend, exacerbating an already grim situation.

“We are witnessing something that has never happened before in Kerala’s history,” Mr Vijayan told reporters. He said the majority of the state’s power and water treatment plants had been submerged, prompting shortages of electricity and drinking water.

State educational institutions and commercial establishments have remained closed for over a week and, citing safety concerns, the authorities have banned tourists from visiting the region.

Officials said the floodwaters that have swept across Kerala since August 8th have left more than 223,000 people homeless. They have also forced the closure of the state’s Kochi international airport on the southwest coast, until the end of the month.

Reports from the state capital Thiruvananthapuram said that the airport’s runway was under several feet of water and many aircraft had been water damaged.

Rail and road links to Kochi, which is also Kerala’s commercial capital and a popular tourist destination during the monsoon months, were impassable, leading to traffic jams and hundreds of cars being washed away.

Thousands of personnel from the federal National Disaster Response Force, the military and the Indian Coast Guard have been deployed to rescue people from flood-affected regions via helicopters and boats, ferrying them to crowded relief camps set up on high ground.

Naval divers ferried scores of people, including women and children stranded in fast flowing waters, to safety. Military medical and relief teams were monitoring the evacuees, inoculating them against the outbreak of disease and supplying them with drinking water and food.

The state government has urged locals not to ignore evacuation orders and to move to state-run relief camps.

Mobile telephone operators had offered free call and data services for a week to subscribers, but officials said power breakdowns had made it difficult for users to recharge their phones.

Military officials said there had been a high animal death toll, especially of elephants. Kerala is renowned for its many game reserves.

There was also concern over an outbreak of diseases such as cholera and typhoid once the floodwaters had receded.

Prime minister Narendra Modi was scheduled to visit Kerala late on Friday night after attending the funeral of former prime minister Atal Bihari Vajpayee in Delhi. Mr Modi is to tour Kerala’s flood-affected regions on Saturday. Federal officials said he was expected to commit more relief and humanitarian assistance to battle Kerala’s floods and their aftermath.

Kerala last saw severe flooding in 1924, but officials said it was not nearly as overwhelming as the current devastation.

About 600 people have died in floods generated by monsoon showers in at least seven other Indian states in the north and east of the country.