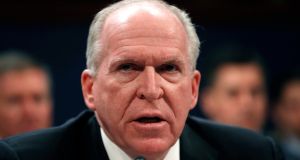 John Brennan has called Donald Trump’s repeated denials that his campaign colluded with Russia during the 2016 election “hogwash”, and accused the US president of revoking his security clearance as part of a “desperate” attempt to interfere with the special counsel’s investigation.

The war of words between the former CIA director and the president escalated on Thursday, as Mr Brennan hit back after being stripped of his security clearance by the White House the previous day – an unprecedented presidential intervention that has prompted widespread criticism.

Having security clearance allows retired officials such as Mr Brennan to maintain access to secret information. A statement from Mr Trump said he had taken the step due to Mr Brennan’s “erratic conduct and behaviour”.

Mr Brennan, who was CIA director during the Obama administration, has increasingly criticised Mr Trump in recent months.

Writing in an article for the New York Times published on Thursday, Mr Brennan described Mr Trumps’s decision to revoke his clearance as “politically motivated” and “an attempt to scare into silence others who might dare to challenge him”.

“Mr Trump’s claims of no collusion [with Russia] are, in a word, hogwash,” he wrote. “Mr Trump clearly has become more desperate to protect himself and those close to him, which is why he made the politically motivated decision to revoke my security clearance in an attempt to scare into silence others who might dare to challenge him.”

“John Brennan is a stain on the Country, we deserve better than this.” Former Secret Service Agent and author of new book, “Spygate, the Attempted Sabotage of Donald J. Trump,” Dan Bongino. Thank you Dan, and good luck with the book!

He wrote that “it is critically important that the special counsel, Robert Mueller, and his team of investigators be allowed to complete their work without interference – from Mr Trump or anyone else – so that all Americans can get the answers they so rightly deserve”.

Mr Mueller is investigating Russian interference in the 2016 US presidential election.

‘Stain on the country’

On Wednesday night, Mr Trump shared a variety of quotes from Fox News pundits bashing Mr Brennan and the Obama administration on his Twitter feed, including one describing Mr Brennan as “a stain on the country”.

Ms Trump also admitted there was a link between stripping Mr Brennan of his security clearance and the special counsel investigation. In an interview with the Wall Street Journal, Mr Trump said: “I call it the rigged witch hunt. [It] is a sham. And these people led it. So I think it’s something that had to be done.”

Speaking from a prepared statement on Wednesday, the White House press secretary, Sarah Huckabee Sanders, alleged that Mr Brennan had “leveraged his status as a former high-ranking official with access to highly sensitive info to make a series of unfounded and outrageous allegations, wild outbursts on internet and television about this administration”.

She added that Mr Brennan’s “lying and recent conduct, characterised by increasingly frenzied commentary, is wholly inconsistent with access to the nation’s most closely held secrets”.

Ms Sanders also listed nine other national security figures whose security clearances were under review. All but one no longer serve in the United States government and it includes several noteworthy Trump adversaries, including the former FBI director James Comey and former acting attorney general Sally Yates.

In his article on Thursday, Mr Brennan claimed that the question was not if collusion took place, but whether it “constituted criminally liable conspiracy, whether obstruction of justice occurred to cover up any collusion or conspiracy, and how many members of ‘Trump Incorporated’” had “attempted to defraud the government by laundering and concealing the movement of money into their pockets”.

The former CIA director has long been a vocal critic of Mr Trump. Recently, he suggested that Mr Trump’s behaviour in his joint press conference with Vladimir Putin in Helsinki rose to the level of an impeachable offence.

Mr Brennan tweeted at the time : “Donald Trump’s press conference performance in Helsinki rises to & exceeds the threshold of ‘high crimes & misdemeanors.’ It was nothing short of treasonous. Not only were Trump’s comments imbecilic, he is wholly in the pocket of Putin. Republican Patriots: Where are you???” – Guardian

1 Brazilian father to be deported days after daughter’s birthday
2 What evidence is there that the IRA still controls Sinn Féin?
3 Coronavirus: Austria stops train services with Italy to contain spread
4 Maureen Dowd: For the White House parasite, all restraint has gone
5 Clare houses surrounded by water evacuated as rainfall warning
Real news has value SUBSCRIBE