Omarosa says she was offered ‘hush money’ by Trump campaign 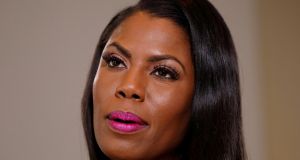 Manigault Newman has already made several serious and provocative accusations about Trump and the White House in her book Unhinged, including that there are recordings of Trump using the N-word.

The White House press secretary Sarah Sanders said earlier this week she was unable to guarantee that any such recording did not exist.

During an appearance on MSNBC on Thursday, Manigault Newman played excerpts of an apparent phone conversation between her and Lara Trump, Donald Trump’s daughter-in-law, which Manigault Newman claims was recorded shortly after her dismissal from the White House.

In the call, Lara Trump, who has a senior role in Donald Trump’s re-election campaign, offers Manigault Newman a job with the campaign that would pay $180,000 a year, in exchange for occasionally attending meetings in New York and doing “speaking engagements”.

Lara Trump says in the phone conversation that “it sounds a little, like, obviously, that there are some things you’ve got in the back pocket to pull out”. She says that if Manigault Newman joined the campaign, everything she would say about Trump would have to be “positive”.

Manigault Newman, a former Apprentice contestant who was once the most prominent black American in the Trump administration, told MSNBC she saw the offer as “an attempt to buy my silence, censor me and pay me off – $15,000 a month”.

Asked if she saw it as “hush money”, Manigault Newman responded: “Absolutely.”

In the course of the conversation, Lara Trump noted “the only thing we have to consider where we’re talking about salary as far as the campaign is concerned is that, as you know, everything is public”.

Manigault Newman said that Lara Trump was clear during their phone conversation that the impetus for the phone call came from Donald Trump.

In a statement, Lara Trump criticised Manigault Newman, calling the tapes “a fraud”, although she did not directly contradict anything on the recording.

She said that the Trump family “had no idea about the basis of her dismissal” when she was fired from the White House, adding: “We still wanted her on our team because we cared so much about her personally.

“That’s why I reached out to offer her a position with the 2020 Trump campaign before we knew anything about the gross violations of ethics and integrity during her White House tenure.”

Lara Trump said she “formed a sisterhood bond that is unlike any I have experienced in my life” with Manigault Newman. She went on: “[I am] absolutely shocked and saddened by her betrayal and violation on a deeply personal level.”

“Every single time the Trump people challenge me, I bring the receipts,” she said of the criticism she has received for making the recordings, and making them public.

She alleged she had further evidence of Trump corruption and said there are “things I’m going to write about and things to share when the time is right”. – Guardian