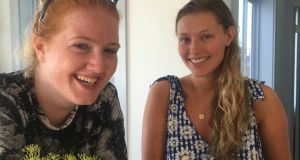 Amidst the stifling summer heat of New York City, the prospect of beach air beckons many of the city’s residents. On this Friday afternoon, I join the trail of cars snaking out across the East River, leaving the skyline of Manhattan behind, and head for Montauk.

This quiet fishing town located at the tip of Long Island is a three-hour drive east of Manhattan. Its secluded dunes and crashing waves imbues Montauk with a wilder, rawer feel than its glitzy neighbours in the Hamptons, the collection of exclusive towns further inland.

Long Island has long been a weekend summer refuge for New Yorkers.  Helped by the expansion of the railroad and the construction of the Brooklyn Bridge which linked Manhattan to its eastern land mass, by the late 19th century Long Island had become the destination of choice for the city’s rich and famous. Magnates like JP Morgan and the Guggenheims built mansions along the peninsula’s sought-after north shore.

The region’s reputation for opulent, decadent parties was immortalised in F Scott Fitzgerald’s The Great Gatsby. Fitzgerald began working on the novel when he lived on Long Island’s North Shore for two years, before finishing the book when he moved to France in 1924. Jay Gatsby’s mansion is believed by many to be modelled on newspaper baron William Randolph Hearst’s estate in Sands Point.

In subsequent decades, as Boston’s wealthy flocked to Nantucket and other exclusive towns near Cape Cod, Long Island maintained its reputation as the destination for young wealthy New Yorkers.

Today, I’m making the journey to see what continues to attract people to the tiny town of Montauk, 200km (125 miles) east of New York City.

It also has a personal component. Twenty-two years ago I, like many Irish students, headed to Montauk with my backpack in search of a holiday job and some summer fun.

Montauk is one of many American towns and cities that have become a mecca for Irish J1 students. Like Ocean City and Wildwood along the Jersey Shore to cities along the west coast like San Diego and San Francisco, Montauk is one of a number of US places that draws Irish students year after year.

Like all good traditions, no one seems to know where the Irish ties with Montauk began. “Really, I’m not sure when it all started,” says Leo Daunt. “It’s definitely been going on since the 70s when my grandfather bought this place. Every year the Irish continued to come and we continued to hire them.”

He runs Daunt’s Albatross Motel, a family-run establishment located a few blocks from the beach where surfers test the waves and families gather under beach umbrellas.

This is Kelly’s second year working in Montauk. “It’s a great place to spend a summer,” says Kelly, who has just finished her final year of commerce in UCD. “Montauk has a nice vibe, and is less busy than some of the big cities.”

She is also hoping to apply for a graduate visa and find an internship when the summer ends, which would allow her to stay in the United States for up to a year.

Smith is also happy she chose Montauk. After spending one summer in San Francisco, she wanted a more chilled vibe. “It’s easy to get around and there’s lots of work available if you have the contacts.”

She studied in Maynooth and, like Kelly, has just finished college. A J1 visa in Montauk is giving her the opportunity to make some money and think about what she wants to do next.

Around the corner on main street, the Gig Shack is a lively restaurant and bar. As I take a table for lunch, an Irish voice welcomes me with a glass of iced water. Sarah O’ Donovan has been living in New York since late last year when she finished her teacher training. Though she rents an apartment in Queens with a friend, the former design student decided to sublet the place and move to Montauk for the summer, knowing she’d find work here.

She says that the opportunity to live and work in America is still a big draw for Irish students and recent graduates.

“At the end of the day, it is still relatively easy to find a job, and the money is still good.” She says that she knows people who can make up to $1,000 (€882) a night working in bars in the city, though these jobs are difficult to get.

While most of the activity centres around Montauk’s Main Street, just off the beach, the yacht clubs and exclusive hotels further north are also a source of employment for the hundreds of Irish that descend here each year.

One of these is Surf Lodge, a low-key resort overlooking Fort Pond less than a mile from the ocean.

While the property was once an Irish bar, it was sold 10 years ago and transformed into a summer getaway for professionals seeking holiday fun.

A casual vibe permeates the Surf Lodge, but its shabby-chic décor can be deceiving. Guests this summer include Malia Obama, Justin Bieber and Tiffany Trump, the US president’s second-oldest daughter.

On this quiet weekday morning, I chat to several Irish students who are gathered in the hotel’s bar area as the day gets under way. Twenty-one-year-old Amie Wiley is studying child psychology and French at NUI Galway. Her boyfriend Sam Boyle has just popped in on his way to work as a bar man at Gurney’s complex about a mile away.

Wiley heard about the Surf Lodge from friends who worked here last year. Like most of the students here she set up the job earlier in the year. But the main problem is finding a place to stay. “Accommodation is definitely the most difficult issue for us. We were lucky that we got a place sorted well in advance, but it’s hugely expensive.”

Many of the workers here have more than one job. Clodagh O’ Hare, a student at UCC explains that she is working three jobs – front of house at the Surf Lodge, bussing tables at a restaurant, and babysitting. She worked in Newport Rhode Island last year, but chose Montauk as her destination for 2018. “Because of the cost of everything here it is difficult to make ends meet,” she explains.

The main draw for most of the Irish students working here is the same that attracted their parents a generation ago – tipping.

The eye-popping prices and costs that are a part of Montauk life have an upside. Almost everyone I speak to admit that tips are generous. “We had one customer here that bought a $3,000 (€2,647) bottle of champagne. These are the kinds of prices and the money people have, so tips are no object,” says one Irish worker at Surf Lodge.

But while most of the students here are happy with their J1 experience so far, figures suggest that the programme is not perhaps as popular as it once was.

In part, the drop reflects the fact that more students are undertaking other schemes such as the Camp Counselor programme, which allows foreign workers to work in US summer camps, and the increasingly popular one-year graduate visa which permits students to live and work in the United States for a year. Similarly, the economic upturn in Ireland may be prompting more people to stay at home to work over the summer.

Another big factor is a change introduced by the US state department in 2016 which requires J1 participants to have work and accommodation arranged before arriving in the country.

Others worry that the presidency of Donald Trump has impacted the programme and the appetite among young people to travel to the US to work.

While Trump suggested during his presidential campaign that he would abolish the J1 programme, so far it has been shielded from the administration’s crackdown on immigration.

However, for many here in Montauk the J1 remains an attractive way to spend the summer. Several of the Irish students I meet mention the Berkeley balcony collapse of 2015 which claimed the lives of six young people. It was tragedy that reminded the public of the continuing role played by the J1 visa programme in Irish life and its importance in cementing links between Ireland and America. Former president of Ireland Mary McAleese captured that link in a letter to the New York Times following the tragedy, criticising the newspaper’s coverage of it.

“I was a J-1 visa student in California over 40 years ago,” McAleese wrote. “Tens of thousands of Irish J-1 students have spent happy summers there over the years since. By far the vast majority have been a credit to Ireland.”

Observing the latest generation of Irish students working and playing hard in the Long Island sun, the J1 summer programme seems as popular as ever. For many, the J1 visa looks set to continue to offer an exciting opportunity to young Irish people to live and work in America and to be an important link between Irish and American culture.