US Democrats are rediscovering identity politics

Janan Ganesh: They needed to start distinguishing one kind of American from another 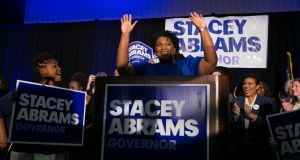 The world did not always notice, so absorbed was it in the fact of his blackness, but Barack Obama sought to de-emphasise race. Had events not forced him into memorable orations on the subject, there is no reason to think he would have given them.

Bill Clinton was another US president who saw his nation through the lens of economics rather than blood. It was the outside observer, namely the novelist Toni Morrison, who read racial significance into him. Had Hillary Clinton won the 2016 election, we would now be well into yet a third technocratic government in as many decades.

For all that identity politics has permeated the wider left, the upper reaches of the Democratic party have remained mostly resistant. Some of this is down to a belief that Americans must be addressed as Americans, not as ethnic subsets, as per the ideals of the republic. Some of it is electoral prudence: a party too identified with minorities is asking for trouble with white voters. These two impulses explain the respectful distance between Democrats and the racialised politics of the university campus.

Among the legacies of Donald Trump is the narrowing of this distance. Eminent Democrats are embracing race as a cause. Elizabeth Warren, a senator from Massachusetts, calls the criminal justice system “racist”.

Kamala Harris, a senator from California and another presidential prospect, resents the term “identity politics”. It belittles the seriousness of race (and gender) inequities, she argues. Georgia’s Stacey Abrams, who could become the first black woman to govern a state, is building a coalition of minority voters, topped up with liberal whites. If it works in November, it could be a template for the national party.

After Trump’s election two years ago, Democrats were advised by the likes of Mark Lilla, a professor of humanities at Columbia University, to reject the Balkanisation of the electorate in favour of a universal offering.

The most obvious reason why they did not was Trump’s conduct in office. It sapped the Democrats’ belief that race could ever be transcended. If the president’s travel bans and quarrels with black athletes did not demand an explicit defence of minorities, then Charlottesville did.

This is the most race-conscious Democratic party since 1988, when Jesse Jackson was briefly frontrunner for its presidential nomination

A year has passed since the Virginia town joined Selma and Appomattox as one of those southern place-names that become abstract nouns, denoting racial strife. The president’s equivocal line on far-right violence there persuaded many Democrats that blindness to race, once their ideal, was now a moral abdication. The party had to speak for people who felt besieged, even if it meant distinguishing one kind of American from another.

As for the party’s wariness of the white voter, demographic change is easing it. Some Democrats believe the ethnic diversification of certain states, such as Georgia and Arizona, is re-painting them from Republican red to, if not Democratic blue, then the pale mauve of electoral competitiveness.

These projections assume rather a lot. And as a political strategy, it also forfeits working-class whites, as though a pitch to them is not worth the discomfort it would cause the metropolitan left. Still, demographics point to a more minority-facing Democratic party.

At this point, an old Washington hand will wonder what the fuss is about. There has been a racial pattern to American politics for a long time, with minorities favouring Democrats and Republicans carrying whites. Each party has appealed to its “own”.

The difference is that racial politics was, for the most part, implicit. It was a matter of coded language and suggestive television advertisements. At no point did either party stop paying lip service to the ideal of an indivisible nation. “They are black, they are white,” said Richard Nixon, even, of his “Silent Majority” in 1968. “They’re native and foreign born.”

The new version of racial politics promises to be much more explicit, with each party appealing to ethnic groups in so many words. If this seems implausible, consider how far US politics has changed in just two years.

This is the most race-conscious Democratic party since 1988, when Jesse Jackson was briefly frontrunner for its presidential nomination. The change is neither surprising nor necessarily permanent. There was always going to be a counterforce to the blood-and-soil nationalism of the modern right.

If the Republicans revert to their pre-Trump ways once he has gone, then the Democrats can go back to the technocratic reticence on race of the Obama-Clinton years. The dread for the republic is that neither reversal ever happens, and the future is fragmentation. – Copyright The Financial Times Limited 2018.