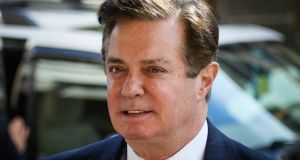 The judge in the trial of US president Donald Trump’s former campaign chairman Paul Manafort has said he will not release the names of the jurors in the high-profile case because he has received threats and fears for their safety.

Judge TS Ellis, who spoke in court as the jury convened for its second day of deliberations on Friday, explained his decision not to release the names and addresses of jurors to the media due to concerns about their “peace and safety”. “I had no idea this case would excite these emotions,” Mr Ellis said. “I don’t feel right if I release their names.”

Mr Ellis also revealed he had personally been threatened and was being protected by US marshals. Jury lists are usually made public unless a judge articulates a reason for keeping them secret. “I’ve received criticism and threats,” Mr Ellis said. “I imagine they would, too.”

His comments came hours after Mr Trump defended Paul Manafort as “a good person” and declined to rule out a pardon as a jury spent Friday deliberating the fate of the former campaign chairman.

“I think the whole Manafort trial is very sad,” Mr Trump told reporters on the South Lawn at the White House, before departing for a fundraiser on Long Island. “I think it’s a very sad day for our country. He happens to be a very good person, and I think it’s very sad what they’ve done to Paul Manafort.”

Mr Manafort faces 18 counts of tax evasion and bank fraud. Asked if he would pardon him, Mr Trump said: “I don’t talk about that now.”

The president also reiterated a line often pushed by his White House: that Mr Manafort only worked for him a short time. In fact the 69-year-old political consultant managed the campaign for nearly five months, a pivotal period in which Mr Trump secured the Republican presidential nomination.

Mr Trump’s comments came as a jury convened for a second day of deliberations in Alexandria, Virginia, following a three-week trial in which federal prosecutors called 27 witnesses to testify against Mr Manafort. The list included Mr Manafort’s deputy on the Trump campaign, Rick Gates, who struck a plea deal and has been co-operating with the special counsel, Robert Mueller.

Although the trial is focused on Mr Manafort’s finances and not Russian interference in the 2016 election, it is the first major test of Mr Mueller’s investigation. Mr Manafort faces up to 305 years in prison.

Mr Trump has downplayed the allegations against Mr Manafort before. In a tweet earlier this month, he likened him to an infamous mobster.

Mr Trump has repeatedly sought to discredit Mr Mueller’s investigation as a “witch-hunt”, even as the special counsel has brought indictments against 32 individuals and three companies, securing five guilty pleas.

This week the president stripped the fromer CIA director John Brennan of his security clearance and threatened similar action against other former intelligence and law enforcement officials. Most have spoken out against Mr Trump.

Although Mr Trump’s move against Mr Brennan prompted fierce criticism in national security circles, the president claimed on Friday he had received a “tremendous response”. “Security clearances are very important to me. Very, very important,” Mr Trump said, adding he would next target a justice department official, Bruce Ohr.

Mr Ohr’s wife, Nellie, was employed during the 2016 campaign by Fusion GPS, the firm that commissioned an infamous dossier on Mr Trump’s ties to Russia that was authored by Christopher Steele, a former British spy.

Mr Trump denied he is attempting to silence his critics, saying he had given Brennan a “bigger voice” by stripping his clearance.

“There’s no silence,” suggestions Trump said. “Many people don’t even know who he is, and now he has a bigger voice. And that’s OK with me because I like taking on voices like that.

“I’ve never respected him. I’ve never had a lot of respect.” – Guardian