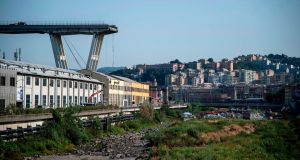 Rescuers work among the rubble and wreckage of the Morandi motorway bridge in Genoa on Friday, three days after a section collapsed. Photograph: Marco Bertorello/AFP/Getty Images

Italy’s government on Friday formally launched the procedure to revoke concessions held by Autostrade per l’Italia to operate toll highways after the collapse of a bridge in Genoa caused at least 38 deaths, prime minister Giuseppe Conte said.

Mr Conte said the transport and infrastructure ministry had sent the letter to Autostrade, a unit of infrastructure group Atlantia which manages the section of the A10 motorway linking the port city to the French border.

“This disaster obliges us to take new initiatives which are much more rigorous than those adopted by previous governments,” Mr Conte said in a statement, adding that the government held the company to blame for Tuesday’s collapse.

Atlantia is controlled by the holding company for the Benetton family, which is famous for its clothing empire. A Genoa court will try to establish the exact cause of the bridge failure, but experts said problems with the concrete-encased cable stays were a possible culprit.

As politicians responded to public outrage over the tragedy, rescue workers used jackhammers and cranes to lift giant slabs of concrete from the riverbed beneath the fallen bridge, hoping to find survivors buried in the rubble.

More than 300 firefighters have been working non-stop since Tuesday, though experts say chances of finding survivors are now slim. The civil protection agency said on Friday that five people feared to be near the site of the disaster were still unaccounted for.

Vehicles on the motorway that links Genoa to the French border west of the Mediterranean port city plummeted 50 metres when a 200-metre stretch of the viaduct collapsed. Firefighters, who are using sniffer dogs as well as heavy machinery, have not yet reached all the cars.

“We are trying to find points where we can penetrate these incredibly heavy slabs. Then the earthmoving equipment moves in to create a passageway where the dogs can enter,” firefighter Stefano Zanut said at the scene.

Rescuers are hoping the large chunks of debris may have created a “triangle of survival” when they fell, where someone could still be alive, he said.

A state funeral for many of the victims will be held on Saturday at Genoa’s convention centre, led by the city’s archbishop, Cardinal Angelo Bagnasco and attended by President Sergio Mattarella and prime minister Mr Conte.

Twelve coffins have already been placed in a large hall, and family members visited them on Friday, sometimes kissing the caskets. One white coffin held the body of seven-year-old Samuele Robbiano, who died alongside his parents.

“It is something that has touched everyone because we all used the bridge and it could have happened to anyone,” Bishop Nicolo Anselmi said after blessing the coffins. Some families plan to boycott the event and hold their own private services, as a sign of protest against what they say was negligence that caused the bridge to collapse.

The funeral of four young men who were en route to a holiday together in France and Spain when the disaster struck was being held in Torre del Greco, near Naples, on Friday. – Reuters