Ireland ranked worst in EU for performance on climate action 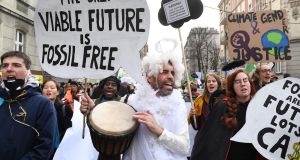 Protesters hold placards during a march for the climate on sidelines of the COP24 summit on December 8th in Katowice, Poland. Photograph: Janek Skarzynski /Getty Images

The Climate Change Performance Index (CCPI) 2019 concludes existing climate mitigation efforts in reducing carbon emissions “will not enable Ireland to achieve either its EU 2020 or 2030 targets”.

The report examines a total of 56 developed countries plus the EU average, and ranks them across a number of criteria to assess the extent to which their actions and commitments are in line with commitments under the 2015 Paris Accord to limit global warming to well below 2 degrees – and to pursue efforts to limit warming to 1.5 degrees.

The CCPI has tracked countries’ performance for the past 14 years. It is jointly published by Germanwatch, the NewClimate Institute and the Climate Action Network, and is regarded as the most authoritative assessment of climate performance published annually.

A long-standing lack of implementation of substantive measures to put the country on a well below 2 degree pathway “results in a very low rating for Ireland’s national policy performance”, according to its latest evaluation published at UN climate summit in Katowice in Poland on Monday.

Reacting to the latest rankings, An Taisce’s Climate Change Committee spokesman John Gibbons said it was “another deeply embarrassing blow to Ireland’s reputation as a good faith actor in terms of doing its fair share in tackling the global climate crisis”.

Commenting on Ireland, the CCPI says it “still rated as the worst-performing EU country in the CCPI. . .and remains in the group of very-low-performing countries”.

The performance in the greenhouse gas emissions category is rated “very low” and the country is also low-ranking performers in the “energy use” category.

There is recognition, however, of increased deployment of renewable energy share over the past five years, and forthcoming support schemes for renewable heat and renewable electricity “which recognise the value of citizen and community participation”. As a consequence, the Republic is rated “medium” in the renewable energy category.

“National experts commend the Irish parliament for its leadership in deciding to pass the Fossil Fuel Divestment Bill, which is the first of its kind in the world, and for the innovative Citizens’ Assembly process which produced far-reaching recommendations for climate action now being considered by a special parliamentary committee working on the development of Ireland’s National Energy and Climate Plan,” it adds.

Therefore, the performance on international climate policy is rated medium. “However, existing climate mitigation efforts will not enable Ireland to achieve either its EU 2020 or 2030 targets domestically. The long-standing lack of implementation of substantive measures to put the country on a well-below-2 degrees pathway results in a very low rating for Ireland’s national policy performance.”

‘Lack of political will’

Not enough countries “prove political will to prevent dangerous climate change”, while global CO2 emissions are rising again after three consecutive years of stability, it warns.

Only a few countries have started to implement strategies to limit global warming below 2 or even 1.5 degrees. While there is a continued growth and competitiveness of renewable energy, the CCPI “shows a lack of political will of most governments to phase out fossil fuels with the necessary speed”.

Co-author Jan Burck of Germanwatch said: “Based on techno-economic developments delay in implementation of low-carbon solutions can hardly be justified. While the G20 summit has shown strong support of 19 countries to support the Paris Agreement, the political will of those Governments to set the right frameworks and incentives for its national implementation is not yet reflected in these words.”

Before Paris, the world was heading to 4 to 5 degrees of global warming, “now we are still on a path to more than 3 degrees; still a catastrophic perspective”, he said.

The costs of electricity from wind and solar have dropped by about a third since then, “so all countries can increase ambition and pace”, said Prof Niklas Höhne, co-author from NewClimate Institute.

In 40 of the 56 analysed countries, emissions decreased between 2011 and 2016. However, investments in fossil fuel infrastructure are “leading to a high risk of a lock-in into high emissions pathways”.

The top three places in the CCPI are unoccupied, because none of the 56 countries or the EU are clearly on a well below a 2-degree pathway in overall performance.