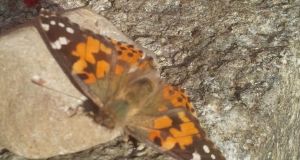 I saw this butterfly on November 13th. How long will it last at this time of year?
John Wynne, Terenure, Dublin 6
The painted lady migrates back to southern Europe and north Africa in autumn; one still here in November is unlikely to survive the winter.

I came across this, which looks like a fungus, in the Burren in a valley close to the Corkscrew Hill.
Frank Folan, Ballyvaughan, Co Clare
It’s a lichen of the Pannaria family, probably Pannaria rubuginosa, which generally grows on wood among mosses. It is an indicator of very clean air.

Could you help me identify the cause of this sudden damage to large swathes of our lawn? I’m thinking it must be badgers, but so many...
Patricia Mulkeen, Ballinfull, Co Sligo
Badgers probably caused the damage if they found plenty of beetle grubs or leatherjackets (the larvae of daddy-long-legs) in the lawn.

I found these two bones washed up on Mullaghmore beach. They were very heavy and stank to high heaven. Are they whale spines?
Andrea McElroy, Mullaghmore, Co Sligo
Yes, they are whale vertebrae.

It was very late for this bee/wasp to be foraging on flowers in mid-November.
Mike Egan, Ballivor, Co Meath
It looks like a male common wasp, which should have died in October when the cold weather normally arrives. Except for the queens, which hibernate, all wasps die in the first cold of the autumn.

Briege Byrne and Sally Starbuck both found a pupa in the house. I suggest that they put it in a jar and wait to see what emerges as it is fascinating to watch a butterfly or a moth emerge from the cocoon.

- Ethna Viney welcomes observations and photographs at Thallabawn, Louisburgh, Co Mayo, F28 F978, or by email at viney@anu.ie. Include a postal address.