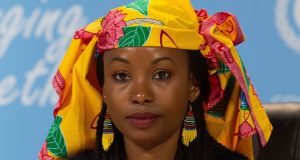 During the open day of negotiations at the COP24 gathering in Katowice, Poland, it was the voices of young people that stood out.

Their importance in the global response to global warming was underlined by UN secretary general António Guterres: “Our younger generations will have to help drive, and complete, the work we start today. We need to harness their energy, invention and political power to raise climate ambition.”

Greta Thunberg began a solo climate protest by striking from school in August. More than 20,000 students around the world have joined her since. The school strikes have spread to at least 270 towns and cities in countries across the world, including Australia, the UK, Belgium, the US and Japan.

“For 25 years countless people have come to the UN climate conferences begging our world leaders to stop emissions and clearly that has not worked as emissions are continuing to rise. So I will not beg the world leaders to care for our future,” she said. “I will instead let them know change is coming whether they like it or not.”

The teenager added: “Since our leaders are behaving like children, we will have to take the responsibility they should have taken long ago,” she said. “We have to understand what the older generation has dealt to us, what mess they have created that we have to clean up and live with. We have to make our voices heard.”

Also at the summit, Toby Thorpe, a student from Hobart, Tasmania, who took part in recent school strikes in Australia, said: “We are in this together. Together we are strong and we will not give up.”

Indication that major banks are becoming more conscious of their climate obligations were outlined at the talks. ING chief executive Ralph Hamers announced a landmark finance collaboration with BNP Paribas, Standard Chartered, BBVA and Société Générale “to measure the climate alignment of their lending portfolios, with the aim of steering them in line with the Paris Agreement”.

The banks, which have a combined loan book of €2.4 trillion across a range of sectors, have signed a commitment letter, pledging to finance change and put their balance sheets to work on climate projects. “It shows that banks are becoming increasingly ready to take the bold steps needed to play our part in achieving a low-carbon economy,” Mr Hamers said.

Scotland first minister Nicola Sturgeon underlined the imperative of a just transition, from societies’ present reliance on fossil fuels to a climate-neutral future: “We have a moral responsibility to do what we can to prevent and mitigate the effects of global climate change. That’s why we’ve created the Just Transition Commission to demonstrate that there is nothing to fear and everything to gain from the transition to a low-carbon economy.”

Meanwhile, former president of Ireland Mary Robinson underlined the importance of COP24. “We’re running out of time. It is important to take action now. We must be more ambitious,” she said.

In the Irish context, she acknowledged big changes were happening and there was “more concern at political level. The Government and political parties are taking the issue more seriously.” There was a long way to go to catch up, she said, “but we’re on the right track.”

Mrs Robinson, a leading campaigner on climate justice, said there were very tough emissions targets to be met. “We must take action with much more ambition to be on track for a carbon-neutral world. That’s why what David Attenborough said is important. The situation is potentially catastrophic, but it is doable.”

“People need to take steps in their own lives. They need to get cross if governments are not doing enough,” she told RTÉ’s Morning Ireland.