Standoff at COP24 in Poland as US, Russia and Saudi Arabia refuse to welcome report 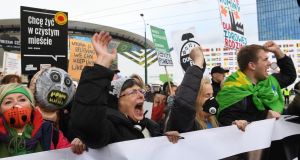 Four big oil and gas producer states have attempted to block the UN climate talks in Poland from welcoming the most stark climate science report in years, marking a difficult end to the first week of negotiations.

The COP24 conference is being attended by 195 signatory countries to the Paris Agreement.

The response met with a backlash from a broad range of other rich countries, as well as poor and developing ones. The standoff was over whether to “note” or “welcome” the findings of the Intergovernmental Panel on Climate Change (IPCC) report published in October.

Saudi Arabia, the US, Kuwait and Russia wanted the final statement to merely “note” the report on the effects of a 1.5-degree rise in the global temperatures, which warned of climate chaos in less than 20 years unless more meaningful decarbonisation was pursued. An alliance of small island states pushed to “welcome” the findings.

The standoff arose during a long plenary session on Saturday, at the end of which negotiators were still aiming to have a simplified a draft for high-level ministerial debate starting on Monday.

“We still have a lot to do,” Michal Kurtyka, Polish president of the COP24, told a news conference. “It is very technical, very complex, very difficult.”

Delegates continued to flag another major outstanding issue: how to reassure developing countries that richer nations would deliver on promises to help finance the cost of shifting to a lower-carbon economy.

Environmental campaigners and NGOs are concerned the talks outcome will lack ambition in the wake of the planned withdrawal by the US from the Paris agreement, as an increasing number of countries who have fossil fuels at the heart of their economies are failing to scale up ambition as required under the pact.

“It’s a question of ‘who wins’ – the likes of the EU and China, with economies deeply invested in climate action and dependent on multilateralism for global trade, or the likes of Saudi dissenters on climate science, with vested interests that put us all in the firing line?” said Camilla Born, senior policy advisor with E3G, a non-governmental organisation.

The plenary chair’s attempt to find a compromise fell flat, setting the scene for a larger political row when ministers arrive in Katowice.

Earlier in the day, Africa stood firm as UN officials tried to finalise a draft of the rules that will govern the agreement. “You can’t bully Africa, it’s 54 countries,” one negotiator said. These obvious issues will mean new proposals could come this week for consideration.

On the streets of Katowice, the capital of Poland’s Silesian coal-mining region, hundreds of demonstrators marched to demand a global deal to limit temperature rises to no more than 1.5 degrees.

Swedish teenage climate activist Greta Thunberg, who sat outside her country’s parliament when on “strike” from school in September in an attempt to get politicians to act, and self-described “recovering climate negotiator” Yeb Saño – now director of Greenpeace Southeast Asia – addressed the gathering in Plac Wolnosci.

The demonstration stayed upbeat in the face of a large presence of police officers with riot shields, tear gas canisters and a water cannon in case of trouble.

Many delegates in Katowice have stressed the French yellow vests protests were unrelated to the UN climate debate, but US president Donald Trump seized on the protests to call for an end to “the ridiculous and extremely expensive Paris Agreement”.

Tensions are expected to be further heightened on Monday night, when the small US delegation is due to stage a side event promoting fossil fuels as part of the solution to global warming. The title of the briefing is “US innovative technologies spur economic dynamism”.

There are currently at least 15 members of civil society groups that were due to attend, who are being held at the borders or who have been removed

The US State Department said it was meant to showcase ways to use fossil fuels as cleanly and efficiently as possible, as well as the use of emission-free nuclear energy. Last year the delegation gave a pro-coal presentation.

“It is beyond absurd for the administration to sponsor an international event purporting to discuss ways to use fossil fuels as cleanly as possible” while attempting to cut Obama-era rules to make fossil-fuel use less polluting, World Resources Institute director Dan Lashof told the Washington Post.

Meanwhile, leading climate campaign group 350.org has outlined its “deep concern” that increasing numbers of colleagues, volunteers and climate activists attempting to attend the talks are being denied entry and/or deported.

“There are currently at least 15 members of civil society groups that were due to attend, who are being held at the borders or who have been removed. They are from Ukraine, Germany, Belgium and Kyrgyzstan,” said spokeswoman Svitlana Romanko.

“From what we understand, the reasons for refusing entry are due to allegations that they are a ‘threat to national security’. These are individuals committed to tackling the climate crisis, and they have a voice in this event,” she added.

“There is a commitment to allow everyone who wishes to engage constructively in this discussion, to be part of it,” Mr Kurtyka insisted. The UN has sought clarification on the numbers prevented from attending the COP, and on those deported.