Why peatlands matter in the battle against climate change

Living peatlands sequester carbon-dioxide, drawing it down from the atmosphere through plants and trapping it underground as carbon 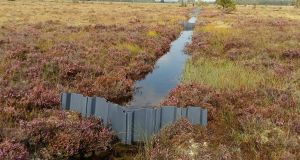 Reversing the flow: plastic dams inserted by Coillte in drains on Aghrane bog in Co Galway. They rewet the peatland, and restore its capacity to capture and store carbon. Photograph: John Conaghan

Hans Joosten talks about raising the profile of peatlands in the climate-change crisis with the authority of an internationally respected scientist, the passion of an evangelical preacher – and a wicked sense of humour.

He is trenchant about the cost, in human lives, livelihoods and biodiversity, of our mismanagement of peatlands. But he is still confident – or at least determinedly optimistic – that reformed management of these ecosystems could make a key contribution to fulfilling the aspirations of the Paris climate agreement.

He is a partner in the Mire Centre at Greifswald University, Germany; one of the world’s leading institutions in the peatlands field. He was a key participant in the UN IPCC research that paved the way to the Paris accord. He describes the treaty, despite its subsequent rejection by pivotal figures like presidents Trump and Bolsonaro (Brazil), as “a marvellous example of global governance…the best sign of global hope that we have had in the history of humankind.”

But he doesn’t hesitate to tell us that we are still going badly wrong, and points the finger close to home.

“In Germany, peatland agriculture causes climate damage of €3.6 billion annually,” he told a conference of the Society for Ecological Restoration (Europe) in Iceland recently, “and gets €300 million in EU grants. Biogas produced from maize [on peatlands] causes eight times more climate damage than burning lignite, but receives green energy subventions. The ‘polluter pays’ principle is put on its head.”

To illustrate his point he showed a slide of a naked man upside down, buried to his shoulders in bog, other body parts flailing helplessly above him.

However, he also argues that radically improved peatland management is the hidden ace in the bad hand that humanity has dealt itself in coping with climate change. Hidden, because those who should have known better have ignored it for far too long. Even today vast peatlands are still being “discovered” across the globe.

It outrages Joosten that only three parties to the UN Paris climate agreement have mentioned peatlands in their NDCs (the national contributions they undertake towards slowing global warming).

But why, you may still be wondering, should we be so concerned about peatlands in relation to climate change? Isn’t the main cause of the crisis our addiction to fossil fuels, and our perverse insistence on swelling the numbers of flatulent cattle on the planet? And isn’t planting trees everywhere the best answer?

These factors are certainly very important, but they are only parts of the very big and complex climate equation, within which peatlands form a significant subset.

Of course, peat is itself a fossil fuel, and emits more greenhouse gases than coal when burned in our beloved turf fires. This point was fully acknowledged by Bord na Móna’s new chief executive, Tom Donnellan, when he recently took the difficult step of advancing the date for ceasing fuel production, with the downside of losing badly-needed rural jobs.

But, as Irish scientists like David Wilson have long been telling us, there’s much more to global (and local) peatlands in the climate change stakes than leaving the bales of briquettes in the ground. In their (wet) natural state, living peatlands sequester carbon dioxide, drawing it down from the atmosphere through plants, especially Sphagnum mosses, and trapping it underground as carbon.

Their capacity for this vital function in regulating climate is far greater than that of forests. This means that putting conifer plantations on our bogs is not a good idea. The disturbance involved in planting and harvesting releases carbon, and the trees dry out the bog.

Joosten’s mantra, repeatedly used in an interview with The Irish Times after the Iceland conference, is that “peatlands must be wet”. In fairness, Bord na Móna’s ecology team has been clear about this idea for years. Restoring and rewetting peatlands to capture carbon features increasingly strongly, if not yet strongly enough, in the company’s policy shift.

“A 15cm thick peat layer contains more carbon per hectare than a tropical forest,” Joosten points out. Though peatlands form only 3 per cent of the planet’s land surface, they are massive “carbon sinks”, storing twice as much carbon as all standing forests.

That’s the good news, but the bad news is that many peatlands are no longer in their natural state. They have been drained for fuel, or for cultivation, and in these conditions they go into reverse in climate terms. They start releasing greenhouse gases, becoming sources instead of sinks for atmospheric carbon.

Worldwide, peatlands converted to farmland now produce almost one third of all agricultural greenhouse gas emissions. Joosten warns that other problems follow: drained peatlands subside, and he predicts that subsidence will lead to the “uncontrolled flooding of 10-20 million hectares of productive land in this century”.

He argues against the farming lobbies who say that we must accept the sector’s greenhouse gas emissions in return for “food security”. He says the public must come to understand that “agriculture on drained peatlands is much more costly for society” than the radical alternative he proposes: rewetting these areas wherever possible to restore their capacity to capture carbon.

Some critics, however, have argued that peatland restoration can actually have negative climate impacts. While rewetted peat stores carbon, it also releases methane, a much more potent greenhouse gas in the short term. However, Joosten insists the evidence shows the bottom line of peatlands climate accounting will be very favourable.

Asked for an example of a country that has taken major steps to reform its peatland management, Joosten points to Indonesia. Having drained its peatlands very rapidly for decades, Jakarta has rewetted more land – 2,000sq km – in a year (2017) than all of Europe has done so far. What caused this policy reversal?

“The enormous fires of 2015 have opened the eyes of politics. There were 100,000 deaths, an estimated $20-40 billion in domestic damage. But we should avoid,” he adds drily, “this type of immiseration in the rest of the world.”

His proposed solution is a dramatic one, with an unfamiliar name: paludiculture, agriculture on wetlands. However, the examples he gave in his presentation related almost exclusively to the production of crops like reeds for building materials, and of biomass as fuel, rather than of food crops

He acknowledges this point, but says that we can progress rapidly towards new wetland alternatives for soy, cereals, and other crops. He thinks that European agriculture has been conditioned, by its ancient Middle-Eastern origins, to think that only dry lands can produce food.

“In southeast Asia another way of agriculture, based on wetlands, came into being [with rice, fish and water buffalo], illustrating that it is possible.”

We have to remember, he says, that “paludiculture is still in its early Neolithic” in Europe, whereas “all dry land crops have thousands of years of selection and breeding behind them. We still have to catch up, but we are progressing fast thanks to the techniques developed by conventional agriculture.”

This is second part of a series by Paddy Woodworth on the science of climate change to coincide with the UN climate conference known as COP24 taking place in Katowice, Poland

1 Coronavirus: More ‘striking’ evidence BCG vaccine might protect against Covid-19
2 Eccentric Thai king’s flying visits ensure a colourful German lockdown
3 Genetics shed light on origins of Irish strains of Covid-19
4 Irish doctors on getting Covid-19: ‘In 90 minutes, I deteriorated quite rapidly’
5 Donald Trump’s clown car administration has put the fear in all of us
Real news has value SUBSCRIBE