Responding to climate change good for our health 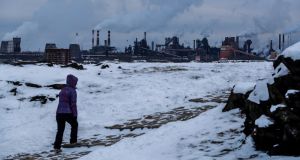 The metallurgical plant in Nizhny Tagil, one of the dirtiest cities in Russia, where the concentration of benzopyrene in the air is 13 times the permissible level. Scientists say the form and pace of the world’s response to climate change will shape the health of nations for centuries to come. Photograph: Sergei Ilnitsky/EPA

This year has been filled with reports about the catastrophic effects of climate change – extreme flooding, prolonged periods of drought, record-breaking heatwaves and crop failures which threaten food supplies. And while more and more people are now alert to the global risks of runaway climate change, many still lack the incentive to change their behaviours to reduce the harmful greenhouse gas emissions that create the problem.

Some experts argue that we feel disempowered when facing the doom and gloom messages of more frequent extreme weather events. And, the common response to disempowerment is disengagement.

But, what if policymakers – and more importantly politicians – started to talk about how responding to climate change could in fact improve the health of our communities and ourselves in ways that most of us haven’t yet taken on board.

The warmer it is, the more easily infectious diseases spread, for example, the rise in Lyme disease in Ireland

So, for example, we now know that travelling by public transport instead of using diesel or petrol cars will reduce greenhouse gas emissions and air pollution, but what if we also realised that it would reduce common respiratory diseases such as emphysema, asthma and bronchitis?

We know that insulating our home will cut our energy bills but consider also the reduction in influenza, colds and respiratory infections with warmer, cosier homes. Switching from fossil fuel heating systems to ones fuelled by renewable energies will also mean better indoor air quality.

Research into these so-called health co-benefits of responding to climate change has been central to the work of the Lancet Commission on Health and Climate Change, a research collaboration between 27 different academic institutions, intergovernmental agencies and the United Nations.

Their latest report – released in advance of COP 24, the UN Climate Change conference being held in Poland this week – points out that older people in Europe are now more vulnerable to heatwaves than those in Africa and southeast Asia. And, the warmer it is, the more easily infectious diseases spread, for example, the rise in Lyme disease in Ireland.

Some 51 per cent of more than 450 cities surveyed expect climate change to seriously compromise their public health infrastructure.

The commission has called climate change a medical emergency but has also said that a comprehensive response “could be the greatest global health opportunity of the 21st century”.

Prof Hugh Montgomery, co-chairman of the Lancet Countdown on Health and Climate Change and director of the Institute for Human Health and Performance at University College London says climate change threatens to undermine the last 50 years of public health gains. But he also says that if more people walk to work or walk to get public transport – the levels of obesity and type 2 diabetes will fall.

There will also be fewer deaths from strokes and heart disease, less peripheral vascular disease, less osteoporosis, less cancer and – wait for it – lower levels of dementia.

Shape the health of nations

Researchers working for the Lancet Commission say the form and pace of the world’s response to climate change will shape the health of nations for centuries to come. The latest Lancet Countdown Report states “at a time when national health budgets and health services face a growing epidemic of lifestyle disease, continued delay in unlocking the potential health co-benefits of climate change mitigation is short-sighted and damaging to human health”.

And, wait for it, a study published in the Lancet in March, found that the health benefits of reducing air pollution and pollution-related diseases significantly outweigh the costs of mitigation measures across the world.

In Ireland, the Environmental Protection Agency has teamed up with the Health Service Executive for the last three years to explore the health co-benefits that flow from policy action on climate change – such as better air quality, water protection, sustainable consumption and production.

Put bluntly, the vast bulk of research concludes that responding to climate change is quite simply also good for our health. But marketing gurus tell us that we have to hear something at least seven times before we believe it.

So, we’ll need many more policymakers and politicians to start talking about the health co-benefits of responding to climate change before we can expect the public to start changing their behaviours.