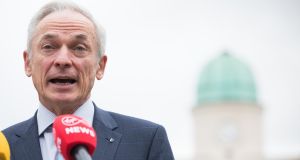 Minister for Communications, Climate Action and Environment, Richard Bruton was not in his department during a two-hour sit in during a climate action protest. File photograph: Tom Honan

More than 40 activists occupied the Department of Communications, Climate Action and Environment in Dublin on Friday for almost two hours, and called on the Government to accelerate progress in adopting climate action legislation.

The occupation, coinciding with the COP24 global climate talks in Katowice, Poland, ended after the department general secretary Mark Griffin undertook to deliver a list of demands to Minister Richard Bruton, who was not in the department at the time.

Among 22 demands was a call for the prompt enactment of three climate action bills currently before Dáil Éireann.

Spokeswoman Sinead Mercier said, “It’s unfortunate that it takes direct action like this to draw attention to such an important issue, but we are eagerly await a guarantee from the minister that Fine Gael will not block these bills.

“We will keep a close eye on Minister Bruton’s actions in the coming weeks and months, but we are glad to have drawn attention to the doublespeak of this Government who repeat commitments to a climate ‘revolution’, while refusing to take any reasonable action to prevent and reverse the effects of climate change,” she added.

Eoghan Ó Ceannabháin of People Before Profit said their protest was far from over.

“We are just starting. As the COP24 climate conference continues, and our comrades in political parties, NGOs, grassroots groups and front line communities worldwide continue to fight for real climate justice, we will continue to highlight this Government’s climate inaction.”

The protest involved members of People Before Profit, Labour and the Greens, along with climate action NGOs including Dublin Ecofeminist Coven.

“Scientific consensus is clear. We have very little time, as little as 12 years, to mitigate the damage caused by humankind to the climate and the planet. Our demands are wide-ranging, but they are in the country and the planet’s best interests,” Ms Mercier added.

They are also seeking a just transition commission, as announced recently in Scotland, to oversee the transition to renewable energy and a carbon-free economy. In addition, the group want an end to direct provision so more climate refugees can be accommodated in Ireland – “as well as a range of domestic measures aimed at ending inequalities exacerbated by an economy reliant on fossil fuels and high carbon emissions”.

A department spokesman said the secretary general met with the protestors, received their petition “and outlined that the Minister and Government were fully committed to Ireland being a leader in climate action, and that Mr Bruton would be bringing forward an all of government plan to deliver on that objective early in 2019”.