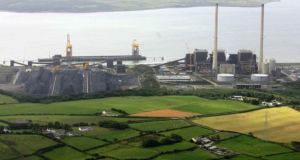 All three main coal-fired turbines at the ESB’s Moneypoint power station have been out of action for the past two months due to “a forced outage” at the facility in Co Clare.

Moneypoint is one of Ireland’s largest generating stations with a total generation capacity of 915 megawatts (MW), accounting for more than 20 per cent of the electricity generated in Ireland in a given year.

However, EirGrid data shows that over the past month coal has generated just over 3 per cent of power, with the grid currently running almost exclusively from gas (43 per cent) and renewables (42 per cent).

EirGrid cannot release fuel mix data to cover a longer period due to “operational sensitivities” but said Moneypoint was currently out of operation due to a forced outage.

The ESB confirmed that all three units at the station have been offline since engineering issues came to light on September 27th. It is understood the first units were taken offline on April 13th and on August 4th last.

“During recent planned overhaul works on Units One and Three, engineering issues came to light which necessitated a schedule extension to repair. As a precaution, Unit Two was taken off-line on September 27th for an engineering inspection and repair. Units One and Three are scheduled to return to service before Christmas, with Unit Two coming back on-line during the first quarter of 2019.”

Confirmation that power has not been running out over the past quarter without Moneypoint “shows we can afford to close the plant earlier than 2025 as currently scheduled”, Green Party leader Eamon Ryan said.

Shutting the plant now rather than seeing out the remaining seven years of its lifespan would stop the release of 30 million tonnes of CO2 into the atmosphere, he told the environmental website greennews.ie.

A Department of Environment spokeswoman acknowledged the importance of Moneypoint in ensuring security of electricity supply in Ireland, “including diversity of fuel and storage”.

“Moneypoint and other generating stations are often taken off-line for maintenance during low-demand periods so that they are available when required during peak periods, most notably in winter time when it is colder and the weather deteriorates,” she added.

The current situation, he added, offered an “opportunity” to replace Moneypoint with more carbon-efficient plants that can operate alongside renewables that are expected to provide half of Ireland’s electrical supply this winter.

“The closure of the most inefficient and most environmental damaging generation plants is a significant step along this process,” he believed.