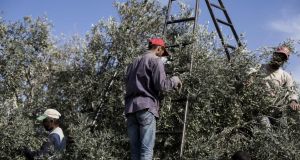 Palestinian farmers pick olives in the Al-Bureij refugee camp, south of the Gaza Strip. The fruit is a staple for many local farmers. Photograph: Mahmoud Issa/Getty Images 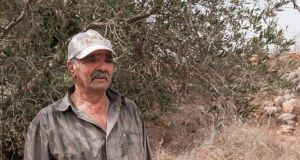 Mohammed Sadiq Yaseen, an olive farmer from Anin, a village straddling the separation barrier in the northwest of the West Bank. Photograph: Niall Sargent 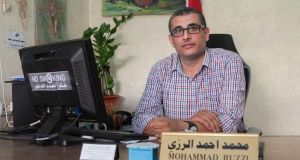 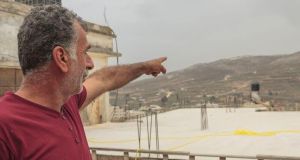 Akram Abu Kareem, olive farmer in Burin, points towards his olive trees, which are adjacent to an Israeli settlement. Photograph: Niall Sargent 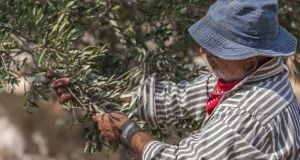 The autumn olive harvest is traditionally a period of optimism for Palestinians in an environment that often offers little reason for hope.

The olive sector is not just an economic lifeline but also a cultural root to 100,000 families who depend on the symbolic tree first planted over 3,000 years ago. But the sector – worth up to the $190 million (¤167 million) to the local economy – is coming under increasing pressure, and not just from customary threats from settlements and restrictions to water and access to land.

These perpetual problems have today fused with the global challenge of climate change that has the region facing an uncompromising swing toward near-perpetual drought.

The olive harvest is suffering badly as a result, says Murad Alkufash, an ecological farmer from Marda village that sits in the shadow of Ariel, one of Israel’s largest settlements.

Farmers have long faced problems arising from Israeli settlements, Alkufash says, including lack of access to land, sewage run-off and stolen trees. The change in the climate, however, is an altogether new problem.

“Everything changed this year,” he says, as Palestinians feel the impact of a changing climate on their trees densely dotted across the West Bank. “These days most of the seasons are bad because there is drought, not enough rain in winter and it’s more hot in summer.” This has led to a year-on-year decline in production.

“People feel that something has changed, they feel the climate change. It’s not just a word they hear on the news – now we live the things,” says Alkufash.

Little winter rainfall combined with excessive spring heat and an olive fruit fly infestation to create what Burnat describes as the “worst season for many years”.

He expects just 10,000 tonnes of olive oil this year, half of last year’s supply. Dr Azzam Saleh Ayasa, who heads the UN Food and Agriculture Organisation (FAO) programme in Palestine, agrees that the harvest will be down by more than 50 per cent.

The German-educated agricultural scientist is concerned that the typical annual fluctuation between good and bad years now appears to be “disrupted”.

This is “very bad news for farmers”, he says, as the olive sector acts as a “lifeline” when the political situation deteriorates.

This “shock absorber” industry, he says, is vital to the economy, accounting for 13 per cent of all agricultural exports.

The vitality of the olive sector is becoming all the more important as Palestine’s agricultural heartland of Jenin in the north of the West Bank continues to falter.

The 4,000-year-old city was once known as the food basket of Palestine, producing an abundance of seasonal crops, including its famous Jadu’I watermelon.

Today, however, even the region’s dependable olive tree is struggling to cope with a changing climate, says Mohammad Ruzzi, manager of the Palestine Fair Trade Association.

The key problem for the association’s 1,300 olive farmers is irregular and declining rainfall in a region that usually receives the most rain in the West Bank. The reduction in rainfall in the past three years has led to very low production, Ruzzi says, with many vegetables now coming in from Israel and further afield.

While partially blaming American and Chinese factories “destroying the climate”, Ruzzi places the water crisis largely at the feet of Israel. The lack of rainwater, he says, has exacerbated wider problems of access to water since the signing of the Oslo Accord in 1995.

Under the agreement, Palestinian water resources are now fully controlled by Israel, with 90 per cent of water from aquifers in the West Bank going to Israel.

In a statement, the Israeli embassy in Dublin said that Mashav, Israel’s Agency for International Development Co-operation, trains Palestinian farmers and officials in the areas of agriculture and water management.

The embassy also accused the Palestinian Authority of paying out €250 million toward people involved in violent activities instead of investing it in infrastructure projects. There was “no doubt” that water and farming issues would “improve tremendously” if such sums were invested appropriately, the embassy said.

Palestinians are also faced with additional restrictions on the drilling and deepening of wells and the installation of rainwater cisterns. Even in this environment, there are factors within farmers’ control to “improve significantly on productivity and profitability”, says Ayasa.

Today, however, many water-intensive crops are struggling after years of decreasing rainfall and water restrictions imposed by the Israeli authorities.

Mohammed Ruzzi, manager of the Palestine Fair Trade Association, says the key problem for the association’s 1,300 olive farmers is access to water in a region that until recently had several springs running from Jenin. “Now we don’t have water for drinking,” he says. “Without water we can do nothing.”

A key climate mitigation technique, he says, is supplementary irrigation during critical months as a “few litres of water at the right timing can mean so much”.

He is, however, aware of the realities of restrictions placed on farmers close to settlements or whose lands are cut off behind the separation barrier dividing Israel from the West Bank.

About 85 per cent of the barrier runs inside the West Bank, impeding access to farmland. Today, more than 60 per cent of Palestine’s 183,000 hectares of agricultural land is under Israeli control and requires permits for access.

When farmers receive a permit – the approval rate was 55 per cent in 2017 – access is for short periods only during the harvesting season itself, Ruzzi says.

“They try to do all the work during the harvesting season, harvesting and pruning at the same time,” he says. “So, year by year the productivity of the trees decreases.”

This is true for Mohammed Sadiq Yaseen, an olive farmer from Anin, a village straddling the separation barrier in the northwest of the West Bank. Now in his late 60s, every year is getting tougher for Yaseen as yields continue to drop. “In a good year, [my land] produces 13 barrels [of olive oil] but this year less than one,” he says.

This problem is all the more delicate as he cannot tend to 60 per cent of his land now located on the other side of the barrier.

According to the UN Office for the Co-ordination of Humanitarian Affairs (OCHA), farmland behind the barrier is in poor condition due to the lack of year-round access and the “lengthy and cumbersome permit” system.

When Yaseen does receive a permit to harvest, the security gate opens for only a few weeks and only from 7am until three in the afternoon.

With the walk to his plot taking 90 minutes and authorities refusing to give his sons permits, he now has no option but to rent the land to another Palestinian farmer. All he can do now is watch on, he says, as his harvest drops and his family land slips away from him. “It’s tough but what can I do?”

Palestinians near settlements also face problems, with hundreds of trees destroyed this year, according to Israeli human rights groups B’Tselem and Yesh Din. The OCHA reports that settlers have damaged 7,000 trees this year, more than four times the level reported in 2016.

Farmers also face intimidation and physical assault from settlers, the UN agency says, pointing to the fact that two farmers in the Nablus region were injured in such incidents this harvest.

International volunteers have also been targeted. In 2015, a British Quaker volunteer was hospitalised after a settler hit him with a rock near the village of Burin. Once traditionally “more a family thing”, the harvest season in the village is now a time of “fear”, says farmer Akram Abu Kareem.

Kareem says farmers are afraid to bring their wives and children to their plots “as they might be attacked by settlers”.

With 350 of his 1,800 trees close to settlements, Kareem says he deals every year with settlers hurling both abuse and stones. “Sometimes they burn or cut the trees or spray chemicals on the trees. In this case they are burned all the way to the roots,” he says.

Almost 120 of his trees were cut and burned by settlers in the past few years, he says. Although many are now producing again, around 32 millennia-old trees were too frail to survive.

With this increasing pressure and a shifting climate making olive farming all the more testing, it is difficult for Kareem and many other Palestinians to see a bright future for the age-old sector.

According to the Israeli embassy, Israeli police act “openly and covertly” with other security forces at various friction points to “prevent such incidents, to enforce, investigate and prosecute those involved”.