Forty-two films to catch in the cinema this summer 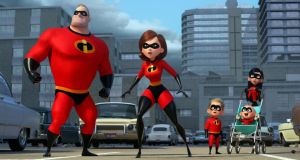 Incredibles 2: Mr Incredible struggles as a stay-at-home dad in this sequel to Pixar’s 2004 hit

Lessons have been learnt. Back in 2014, some weeks after Brazil were thoroughly spanked by the Germans, Hollywood’s summer sputtered to a halt after taking in $3.77 billion at the box office, down a full 22 percent from the previous year. It was the lowest-grossing summer since 2005; adjusting for inflation, it was the worst since 1992.

This year half the world is expected to tune in for the opening World Cup encounter between Russia and Saudi Arabia, on June 14th, so most of the season’s big hitters have either been and gone or are biding their time. The big-splash counterprogrammers of 2014 – 22 Jump Street, say, or The Fault In Our Stars – have given way to smaller, opportunistic movies, including the hotly tipped horror Hereditary, the trippy temporal sci-fi of The Endless, and the Irish hopefuls Kissing Candice and Lost & Found.

There are quite a few women-led projects – Whitney, Maquia, In the Fade, Ocean’s 8 – over the coming months. But the two biggest women-led summer movies, Mamma Mia!: Here We Go Again and The Spy Who Dumped Me, don’t come out until after the World Cup final, on July 15th. Have the studios realised that soccer isn’t an exclusively male interest?

The only tent-pole film due during the football is the Purge prequel, The First Purge, and that won’t hit cinemas until July 4th, two days before the first quarter-finals, with only a week and a half of the tournament left to play. Come mid-July and normal franchise service will resume with Incredibles 2 (July 13th), Mission: Impossible – Fallout (July 26th) and Ant-Man and the Wasp (August 3rd).

Hereditary
Directed by Ari Aster. Starring Toni Collette, Alex Wolff, Milly Shapiro, Ann Dowd, Gabriel Byrne
When her mother dies, Annie (Toni Collette) struggles to keep her dysfunctional family together, but there are far more bloodcurdling traumas to come in the most talked-about horror movie since The Exorcist.

The Happy Prince
Directed by Rupert Everett. Starring Rupert Everett, Colin Morgan, Emily Watson, Colin Firth
Rupert Everett has written, directed and starred in this account of Oscar Wilde’s sad final years, including his exile to Naples and Paris, where he is often recognised and harassed. Includes his reconciliation with the untrustworthy Alfred Bosie Douglas (Colin Morgan) and its tragic fallout.

Kissing Candice
Directed by Aoife McArdle. Starring Ann Skelly, Ryan Lincoln, Conall Keating
The Omagh director Aoife McArdle makes her debut with this coming-of-age drama about a volatile young woman (Ann Skelly) who falls in with a bad crowd, much to the chagrin of her policeman father.

In the Fade
Directed by Fatih Akin. Starring Diane Kruger, Denis Moschitto, Numan Acar, Samia Muriel Chancrin
When Katja’s Kurdish husband and her five-year-old son, Rocco, are killed by a bomb, the subsequent investigation and trial uncover a neo-Nazi network. Diane Kruger was named best actress at Cannes for her impressive turn as the unfortunate heroine.

Maquia: When the Promised Flower Blooms
Directed by Mari Okada. Featuring Manaka Iwami, Miyu Irino, Ai Kayano
In a fantastical medieval world of dragons and immortals, the long-living Maquia learns about motherhood and loss, as her adopted son Erial grows into adulthood and beyond, while she doesn’t age. An imaginative directorial debut from the anime veteran Mari Okada.

The First Purge
Directed by Gerard McMurray. Starring Y’Lan Noel, Lex Scott Davis, Joivan Wade, Luna Lauren Vélez, Marisa Tomei
The shadowy New Founding Fathers of America have a plan to keep the overall crime rate down by allowing free-for-all violence over one night in an isolated community. As this is a prequel to the wildly successful Purge sequence, expect mayhem.

Whitney
Directed by Kevin Macdonald. Featuring Whitney Houston
Arriving more than a year after Nick Broomfield’s thorough portrait of Whitney Houston, Whitney: Can I Be Me, Kevin Macdonald’s film doesn’t contain the extraordinary backstage footage of its predecessor, but it does feature the Houston family and new revelations of childhood molestation.

Skyscraper
Directed by Rawson Marshall Thurber. Starring Dwayne Johnson, Neve Campbell
Will Sawyer (Dwayne Johnson), former FBI agent and amputee, lives in the tallest and safest skyscraper in Hong Kong with his wife (Neve Campbell) and children. Whoops. Scratch that. It’s not the safest skyscraper in Hong Kong, after all. Here come the terrorists.

Ant-Man and the Wasp
Directed by Peyton Reed. Starring Paul Rudd, Evangeline Lilly, Michael Peña, Walton Goggins, Michael Douglas, Laurence Fishburne, Michelle Pfeiffer
Okay. So this is set between the events of Captain America: Civil War and Avengers: Infinity War. We can buy that. But it still doesn’t explain why Ant-Man and Hawkeye were no-shows for Infinity Wars. More importantly, why is Marvel killing time when we just want to know who is really dead and who isn’t?

Teen Titans Go! To the Cinema
Directed by Peter Rida Michail and Aaron Horvath. Starring Greg Cipes, Scott Menville, Khary Payton, Tara Strong, Hynden Walch, Will Arnett, Kristen Bell, Nicolas Cage
In common with Lego Batman, Cartoon Network’s Teen Titans Go! has maintained a winning, irreverent distance from the rest of the rather po-faced DC universe. The Titans’ first big-screen adventure features Lego Batman’s Will Arnett as the villain and Jimmy Kimmel as Batman. And Nicolas Cage gets to realise his lifelong dream to play Superman. Has to be fun.

The Darkest Minds
Directed by Jennifer Yuh Nelson. Starring Amandla Stenberg, Mandy Moore, Gwendoline Christie
A plague wipes out almost all of the United States’ children, leaving the survivors with special powers. A fearful government places them in an internment camp. The latest attempt to spawn a franchise from a hit young-adult novel.

The Meg
Directed by Jon Turteltaub. Starring Jason Statham, Li Bingbing, Rainn Wilson, Ruby Rose, Winston Chao
What do you mean you haven’t seen the trailer for The Meg? It’s got Jason Statham in a submarine battling a prehistoric Jaws. A trillion YouTube users can’t be wrong.

Under the Tree
Directed by Hafsteinn Gunnar Sigurðsson. Starring Steinþór Hróar Steinþórsson, Edda Björgvinsdóttir
A mean-spirited elderly couple, Inga and Baldvin, fall out with their neighbour Konrad and his younger wife, Agnes, over a tree. You will not believe how dark things get as the tensions escalate in this deliciously black Icelandic comedy.

Christopher Robin
Directed by Marc Forster. Starring Ewan McGregor, Hayley Atwell, Chris O’Dowd, Brad Garrett, Toby Jones, Nick Mohammed, Peter Capaldi, Sophie Okonedo
Christopher Robin has grown up to become grumpy Ewan McGregor, so Pooh and the Hundred Acre Wood crew pay him a visit. Alex Ross Perry’s involvement in the script gives us some hope that this isn’t another Hook. Even though it has exactly the same plot.

The Equalizer 2
Directed by Antoine Fuqua. Starring Denzel Washington, Ashton Sanders, Pedro Pascal, Melissa Leo, Bill Pullman
Somebody has foolishly killed one of the Equalizer’s chums, so the Equalizer sets out to avenge – or, if you will, equalise, matters. A Denzel actioner with Antoine Fuqua, director of Training Day and Southpaw, at the helm. Worst-case scenario: entertaining.

The Spy Who Dumped Me
Directed by Susanna Fogel. Starring Mila Kunis, Kate McKinnon, Sam Heughan, Justin Theroux, Hasan Minhaj, Fred Melamed
Audrey (Mila Kunis) and Morgan (Kate McKinnon), are best friends who unwittingly become entangled in an international conspiracy when Audrey discovers the boyfriend who dumped her (Justin Theroux) was actually a CIA operative. You may think the spy parody is all played out, but the trailer is promisingly silly.

Slender Man
Directed by Sylvain White. Starring Joey King, Julia Goldani Telles, Jaz Sinclair, Annalise Basso, Javier Botet
Following on from a 2013 drama of the same name and from the 2016 documentary Beware the Slenderman, the world’s scariest creepypasta gets a widely released movie. This hasn’t gone down well with relatives of Payton Leutner, who in 2014 was lured into woods and stabbed 19 times by her friends and fellow 12-year-olds Anissa Weier and Morgan Geyser, in Wisconsin, in an attempt to impress the titular urban legend.

The Children’s Act
Directed by Richard Eyre. Starring Emma Thompson, Stanley Tucci, Fionn Whitehead
A British high-court judge is asked to rule in the case of a teenager with leukaemia who is refusing to undergo a life-saving blood transfusion because he is a Jehovah’s Witness. The second Ian McEwan adaptation of 2018.