‘Solo: A Star Wars Story’: The making of a weak movie

Things were ‘getting weird’ on the set of the Han Solo film. So they changed director

Tara Brady of the Irish Times talks to the cast of 'Solo: A Star Wars Story' about the troubled production. 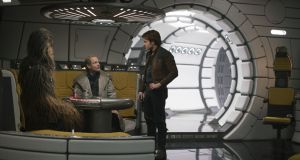 Joonas Suotamo is Chewbacca, Woody Harrelson is Beckett and Alden Ehrenreich is Han Solo in ‘Solo: a Star Wars Story’

The timing couldn’t be more zeitgeist-friendly. The video dropped within weeks of the eagerly awaited Solo: A Star Wars Story – a backstory for the swooned-over Harrison Ford character – which stars Glover as Lando Calrissian, the role first made famous by Billy Dee Williams in The Empire Strikes Back.

But on the morning after Solo’s premiere at the Cannes Film Festival, the singular hyphenate artist is happy being a cog in a much larger machine.

That camaraderie was needed in a project that, ahead of its hotly anticipated global release, has become famous for its troubled production history.

As long ago as 2012, and before he sold the entire Star Wars galaxy to Disney for a cool $4.05 billion (€3.4bn), George Lucas had commissioned veteran screenwriter Lawrence Kasdan (The Big Chill, The Accidental Tourist) to write a standalone origins script for Han Solo.

After the costly Disney acquisition, the business chatter all seemed to switch to fanservice, and a film based on niche favourite Boba Fett – as confirmed by Disney chief executive Bob Iger in 2013 – looked like the first of many likely spin-offs.

Hail, Caesar! star Alden Ehrenreich was cast in March of that year and filming began in January 2017 with hit-making directors Phil Lord and Christopher Miller (Cloudy With A Chance of Meatballs, The Lego Movie) at the helm. It ought to have been a match made in heaven.

We may never know exactly what happened in Pinewood Studios while Solo was being shot.

It was, says Emilia Clarke, who plays Han’s love interest: “Like they (meaning studio folk) were the grown-ups and we were the children; they protected us from what was going on.”

“Phil and Chris are good directors, but they weren’t prepared for Star Wars,” one unnamed actor told Vulture in March. “After the 25th take, the actors are looking at each other like, ‘This is getting weird.’ (Lord and Miller) seemed a bit out of control.”

Lord and Miller left the project in June 2017, with just weeks left on the shooting schedule, after reportedly being fired over “creative differences” with Lucasfilm. They were replaced by Ron Howard, the perennially safe pair-of-hands behind Apollo 13, The Da Vinci Code and Frost/Nixon.

“I was really sad to see the two guys go,” says Woody Harrelson, who – don’t ever change – has turned up in pyjama bottoms and socks for our interview. “But when Ron Howard came in I was like, wow, I’m happy to sit here at the feet of the master and watch him doing his thing.”

“Ron came in with a whole different energy,” says Newton. “He was so excited by what he might be able to do. He was excited by the work he had already seen. And he was excited because he knew he could help. And to take on that role at that stage; it’s humbling to see someone do that. He’s a massive Star Wars fan and he’s really, really good at this. He has made a great movie. And that comes from the contribution of the first two directors. But ultimately you really got to give it up for Ron Howard.”

The latest Star Wars directorial divorce has sparked debates about the nature of film-making in a galaxy far, far away. In summer 2016, screenwriter Tony Gilroy was brought in to get the Garth Edwards directed Rogue One over the line.

Last September, Lucasfilm announced that Jurassic World director Colin Trevorrow – despite having directed the (then) fifth biggest film of all time – would no longer be directing Episode IX.

Industry insiders have often characterised Lucasfilm president Kathleen Kennedy as the real author and architect behind the current Star Wars cycle, despite the fact that Kennedy made headlines in 2016 when she suggested that the time was not quite right for a female Star Wars director.

While it’s tricky to get exact ratios, it has been suggested that Ron Howard, who took over from Miller and Lord, re-shot as much as 70 per cent of the film. The role of the villainous Dryden Vos, originally played by Michael K Williams, had to be recast entirely when the actor was unavailable for extensive reshoots. Howard promptly called in Paul Bettany who he has previously cast in A Beautiful Mind and The Da Vinci Code.

“It was really seamless,” insists Bettany. “Ron is a perfect fit – in terms of casting – to take over in a movie like this. He’s impossible to resent. I think it can empirically be proved that Ron Howard is the most likeable human being on our planet. He will likely tell you a story about how he rung me up and that I was the person he wanted for the job. The truth is I texted him and begged him to be in Star Wars. I didn’t know what role I could take and I wasn’t sure where they were with the shooting, of course. I just got very lucky, I would have been a droid or a wookie or anything. So it was a real surprise when he gave me the bad guy.”

Howard is, characteristically, more modest about his contribution. “I felt like it was an unfortunate situation that I could help with,” he says. “It was an unusual creative adventure. Kind of like an experiment in a crazy way, and unlike anything I’ve ever been involved in. I had the benefit of having a story and script I really believed in and an idea George Lucas believed in. I already had the great cast Chris and Phil put together. Fans drive this franchise. I approached it almost like it was a true story. You wouldn’t want to get it wrong if you were doing a movie. You’d use NASA advisers like I did with Apollo 13 or Formula One people when I was making Rush.”

Howard insists that the troubled production label is a misnomer. “I didn’t witness any of that,” he says. “I came in and was enthusiastic and maybe my enthusiasm was infectious. My first experience of the galaxy far, far way was seeing it twice the day it came out. I’ve never really analysed it until I came to direct it, but it’s funny, it’s exciting, it’s dramatic, it’s a little bit political. It’s classic but with cutting edge visuals. It’s challenging, but really fun to take on. Just like three dimensional chess.”

The Atom: A Love Affair

Review: Vicki Lesley’s documentary worthily tries to cover all bases but lacks punch as a result

How was the Irish Border drawn in the first place?
9