‘On Chesil Beach is about a young, sexually inexperienced couple on a miserable honeymoon 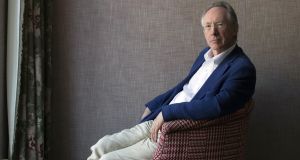 Ian McEwan’s bananas arrive at the table. “I had a craving for a banana,” he says, half-apologetically: “Would you like one?”

Introducing the film at last year’s London film festival, Ronan, who earned an Academy Award nomination for her work on the 2007 adaptation of McEwan’s Atonement said: “Ian and I have known each other since I was 12. [On Chesil Beach] was always a book that – from my teenage years – I would have loved to have been involved in if it ever was adapted. When it came to me it was a bit of a no-brainer. It was always something I had had my eye on. It was just about me being the right age to do it.”

Watching the 1962-set On Chesil Beach, in which a young, sexually inexperienced couple honeymoon miserably, it’s impossible not to think of the opening lines of Philip Larkin’s Annus Mirabilis: “Sexual intercourse began/ In nineteen sixty-three . . . Between the end of the ‘Chatterley’ ban/ And the Beatles’ first LP.”

“I didn’t have it specifically in mind for the year or 18 months when I was writing the novel,” says McEwan, writer of both the script and the source novel. “But I always have Larkin in mind. I think there’s an unwritten thesis to be done on the effect of Larkin’s poetry on prose. I steal many of his cadences, often realising only in retrospect. It’s a steal no one would ever see, because it’s only a cadence, or a foot missing at the end of a sentence.”

He smiles. “And I do like those fictions. The sort of fiction that we all love, about the world changing. Those fictions are helpful. There’s a parlour game to be invented for it. For Virginia Woolf the world changed when Lytton Strachey came into a room and saw a stain on her sister Vanessa’s dress, and asked: ‘Semen?’ Someone else wrote that the world changed in 1385 when suddenly people stopped imaging themselves as a group and became individuals. Really? Was that it in November?”

On Chesil Beach concerns the wedding night of 22-year-old history graduate Edward Mayhew (Billy Howie) and promising violinist, Florence Ponting (Saoirse Ronan). The two have come to the titular Dorset seaside resort for a revolting dinner (melon with glace cherry for starters, sad meat and potatoes, unspeakably trifle) in a modest hotel room, where they later struggle to make it past second base. As the novel puts it: “They were young, educated and both virgins on this, their wedding night, and they lived in a time when a conversation about sexual difficulties was plainly impossible.”

“In 1962, I think the world was about to change and then only tiny bits of it,” says McEwan. “The human race was about to warm up. I think the unwritten history of that era was the transformation in the relationships between adults and children. If you were a 50s child you could be loved and managed but you were never spoken to. Not in the way we’ve learned to speak to children. I think 1962 was much the same as 1958 or 1956. It was a rather stifling, formal, conventional, misogynistic, paternalistic society, and it hasn’t all gone.”

He pauses: “But I think we’ve replaced one set of problems with another, sexually and emotionally. This is a young couple, who come to marriage in state of grace. To become adults, you got married, and to prove to everyone that you weren’t gay, you got married. We’ve replaced that with peer pressure and social media and young boys watching athletic internet pornography and then having weird and distorted ideas about sexuality. And telling young women the shape they should be. And all of that sort of stuff.”

At 69, having written some 14 novels and five screenplays, McEwan is accustomed to seeing his name roll by on closing credits. Many of his novels, including The Comfort of Strangers, Enduring Love, and Atonement have been adapted by others. He, in turn, has written screenplays based upon other writers’ works, including The Good Son (from the novel by Todd Strasser) and Sour Sweet (by Timothy Mo). McEwan has two adaptations of his own novels scheduled for release this year: The Children Act will follow On Chesil Beach in late August.

“It’s always technically challenging and interesting,” he says. “There are certain things that movies can’t do. They can’t do interiority and consciousness, thoughts and feelings.”

In the course of the epic book-long conversation between Alfred Hitchcock and François Truffaut, Hitchcock had some advice about adapting literature: “What I do is read a story only once, and if I like the basic idea, I just forget all about the book and start to create cinema. Today I would be unable to tell you the story of Daphne du Maurier’s The Birds. I read it only once, and very quickly at that.”

“Yes,” nods McEwan. “When it’s your own book you have to take it out of the bin. I didn’t mind coming back to this after four of five years. I wasn’t boring. I like this novella. It turned out exactly as I wanted. The thing about turning this novel into a screenplay is that these characters don’t speak to each other in the novel. A lot is unsaid. Especially for Saoirse’s Florence. But if you have a lens you have the potential to visually overwhelm. I probably piled on the misery on Edward more than I had done. I wouldn’t have dreamed of having Edward and Florence see each other years later in the novel. It wouldn’t have occurred to me. But that’s kind of an irresistible idea for film.”

Born in Aldershot, McEwan spent most of his childhood in Singapore, Germany, and Libya, according to where his father, a working class Scotsman who eventually attained the rank of major, was stationed. He is “a colonial child by accident” who might just easily have been a Scottish writer had his father shown any nostalgia for Scotland”. Instead, his father never returned to Scotland after he left for Dunkirk and McEwan became an English writer through his English mother and a stint at state boarding school.

He’s accordingly dismissive of the notion of Britishness and has been one of Brexit’s most vocal critics.

“I’m very resentful that you get to have an EU passport while I’m being deprived of my EU citizenship. I think of identity as happening in sets. It’s family and friends and widening circles. I’m an English writer not a British one. My wife is a passionate separatist from Scotland. I have a Scots father and English mother. I always thought the fact that there were no British poets – there were English poets and Irish and Welsh and Scottish poets – showed that their imagination had not been forced by the Act of Union. Imaginations were free locally. All great writing is local.

“One of the reasons I’ve never liked certain forms of European postmodernism is because it always struck me that they were trying too hard to be international. On Chesil Beach is an English novel, not a British one. It’s an anti-Brexit novel. But we never thought of that until after we started production. There was no golden age. Whenever I see a picture of some young poet circa 1955, he’s 24 years of age with a pipe clenched, and I think: you pompous fool. Think of all the young women – especially in Ireland – who wound up in institutions because they had babies out of wedlock. Out of wedlock! Think of all the weirdness about being gay. It was culturally rotten, not golden.”

McEwan’s career makes for a curious history. He has been winning accolades since his first collection of short stories, First Love, Last Rites, won the Somerset Maugham Award in 1976. His earlier, darker fictions delved into incest (The Cement Garden), murderous fetishism (The Comfort of Strangers), stalking (Enduring Love) and comic euthanasia (the Booker Prize-winning Amsterdam). But the writer once dubbed Ian Macabre has become increasingly detailed and sophisticated in his plotting, studying physics for Solar and High Court rulings for The Children Act. He spent two years shadowing a neurosurgeon for 2005’s Saturday.

For all that diversity, McEwan is continually lumped in with a rather incongruous group of writers that includes Martin Amis, Julian Barnes, Salman Rushdie, and the late Christopher Hitchens (who dedicated his book God is Not Great to McEwan).

“We never thought we were a movement,” he says. “We were very much part of the generation that loathes a manifesto. I never saw much in common between our writing, I don’t think the others did either. All that matters to us is that we knew each other before our first books. And we read each other. We never talked to each other about our writing. That was considered bad form. The only way to get your writing talked about is to be out of the room.”

On Chesil Beach opens May 25th