Review: It has pretty good opening 20 minutes, but slides quickly into incoherence

Tara Brady of the Irish Times talks to the cast of 'Solo: A Star Wars Story' about the troubled production. 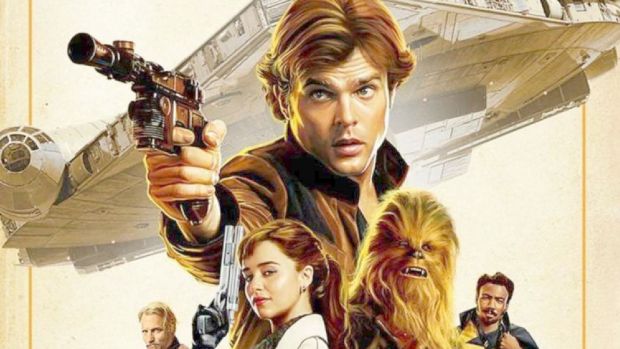 Faced with the unenviable challenge of echoing the gorgeous, ex-carpenter cool of Harrison Ford in 1977, Alden Ehrenreich falls short

It’s a car chase movie. It’s a heist movie. It’s a poker movie. During the pretty good opening 20 minutes, it actually promises to be a space version of Howard Hawks’s Only Angels Have Wings. Hard-talking male flyers trade quips with smart female observers.

The film may have had a troubled production. Ron “safe pair of hands” Howard was brought on after initial directors Phil Lord and Christopher Miller fell out with the management over what we used to call musical differences. But at first it looks as if they’ve really pulled it off.

Young Han Solo (Alden Ehrenreich), who longs to be a pilot, zips about the streets of a dumpy planet with his girlfriend Qi’ra (Emilia Clarke) until circumstance flings him into the Imperial army. Year later, he falls in with a tough crew of hustlers led by Tobias Beckett (Woody Harrelson) and they embark on a scheme to rob barrels of something dangerous for one Dryden Vos (Paul Bettany at his slipperiest) and his dodgy sky-bound cartel.

(Dryden? Beckett? Did someone major in English literature here?)

What do you know? Qi’ra is here as Dryden’s lieutenant. I don’t know what sort of “lieutenant” dresses as she does at that time of the day. Lieutenant of sex workers, perhaps. What a shame in a film with some very strong, original female characters. Anyway, Qi’ra is dispatched with the gang to keep an eye on them.

Sadly, something goes a bit wrong here, and the film slides off into semi-incoherence.

The joins in the “troubled production” show through as characters spend minutes on end explaining unnecessary details of the plot. The action sequences become increasingly hard to follow. The warring factions mount up like the rival rebellions in Life of Brian.

Once Chewbacca returns and we are reunited with the Millennium Falcon, Ehrenreich’s inadequacies as a proto-Harrison Ford become more and more evident.

Don’t get us wrong. He’s a good actor and he fires out the lines better than many contemporaries could manage. But faced with the unenviable (perhaps impossible) challenge of echoing the gorgeous, ex-carpenter cool of Harrison in 1977 he falls short. Who wouldn’t?

Solo is not the disaster that many feared when news leaked out of those firings and hirings. But it’s very much a film of good bits and bad bits. Phoebe Waller-Bridge, creator of Fleabag, has great fun as L3, a robot who yearns for autonomy in a delightful echo of Bender from Futurama.

It hardly needs to be said that Donald Glover rocks as a younger, even more laid-back Lando Calrissian. But Emilia Clarke is desperately underpowered, and even the characters themselves seem to eventually give up on the back-of-an-envelope plot.

I’ve got a humdrum feeling about this.

Solo: A Star Wars Story is in cinemas from May 23rd