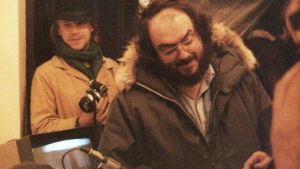 This documentary on the man who acted as factotum to Stanley Kubrick in the later decades of his career probably requires the viewer to buy into the holy myth of that film-maker. The dedication that Leon Vitali, originally an actor, exhibited towards Kubrick would seem like madness if the films weren’t worth seeing. It still seems a little like madness.

Vitali was doing quite well for himself before he was cast as Lord Bullingdon in Barry Lyndon. Kubrick liked Vitali and Vitali respected Kubrick. When the shoot was over, Vitali studied aspects of the film-making process with a mind to securing a job with Kubrick. By the end of the 1970s, he was helping Kubrick develop The Shining. It was Vitali who cast young Danny Lloyd as Danny. He went on to become a protector, minder, logistics boffin and, when the director died, a protector of his legacy.

Interviewed at length, Vitali comes across as a genuine evangelist for the Kubrickian faith. With creased face and long, straggly hair, he gives the impression of a well-worn Rolling Stone discussing Exile on Main Street from an island retreat. There aren’t a great many surprises. He explains that Kubrick could be charming when he wanted to be and, when the mood took him, an absolute monster. His obsession with repeated takes is blamed on a desire to get the scenes clear within his own head.

Anybody with any interest in Kubrick will be diverted by Filmworker, but it remains an oddly clunky piece of work. A good hour into the film, having given us little background on Vitali, the film brings us back to his youth to suggest his relationship with Kubrick mirrors that with his oppressive father. No attempt is made to pull apart the inadequacies of Kubrick’s last two films.

There is also a deeply puzzling silence from the wives of both Vitali and Kubrick. If there is some sort of breach with Christiane Kubrick – whose name barely appears – then we needed to be told.

Plans lodged for demolition of The O’Rahilly house
9