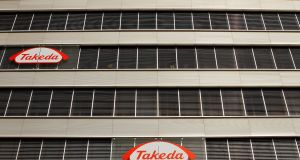 Japanese pharmaceutical group Takeda will create up to 70 new jobs as it invests €25 million in the construction of a new facility at Grange Castle in Dublin.

In addition to creating full-time roles when the facility is up and running in 2021, the investment will bring 70 temporary construction jobs to the site.

The largest pharmaceutical company in Japan, Takeda first set up operations in the State in 1997, manufacturing products for global markets. In 2002, it chose Dublin as the location for its first active pharmaceutical ingredient facility outside Japan.

Last year the group announced a €40 million investment in the construction of a standalone production facility for the manufacture of part of its oncology portfolio at Grange Castle.

Paul Keogh, the plant’s managing director, said the roles being created were in the areas of quality, manufacturing and engineering.

“We have a great team here in Ireland and are committed to continuing to put patients first through the timely manufacture and supply of high quality products from our site,” he added.

Minister of State at the Department of Enterprise and Innovation, Pat Breen, said Takeda’s investment decision was a “great win and vote of confidence in Ireland”.

IDA Ireland chief executive Martin Shanahan said the decision demonstrates Takeda’s continued commitment to Ireland, adding that the State is a “globally recognised centre of excellence in life sciences due to the country’s strong regulatory track record and talent availability”.

Listed on the Tokyo stock exchange, Takeda employs more than 400 people across its plants at Citywest in Dublin, Bray in Co Wicklow and Grange Castle.