NIBRT teams up with US college for $10m biologics facility

NIBRT to collaborate with university to train about 2,500 people annually at new centre 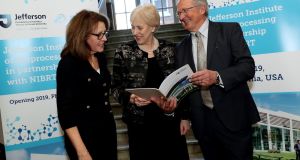 A major US university has turned to Ireland to find a model to train staff working at the leading edge of the pharmaceuticals sector.

The UCD-based National Institute for Bioprocessing Research and Training (NIBRT), is teaming up with Philadelphia’s Thomas Jefferson University to set up the first education and training centre for biologics manufacturing in North America.

The collaboration is valued at about $10 million.

NIBRT works closely with industry in Ireland – including many US firms with operations here – to train staff in the skills needed for modern drug development and manufacture.

Now, the Dublin centre will establish a similar facility in Philadelphia. It will serve about 2,500 people annually once it is fully up and running, preparing engineering students and industry professionals to lead in what is still an emerging field.

Biologic pharmaceuticals are manufactured in a living system such as a microorganism, plant or animal cell, often using recombinant DNA technology. The development of such pharmaceuticals is growing rapidly, representing a major shift in the industry from traditional chemical synthesis techniques.

It is estimated that more than 40 per cent of therapeutics currently in research and development are biopharmaceuticals and each of the world’s top 10 companies has a presence in Ireland.

NIBRT, which is located on University College Dublin’s Belfield campus, is a €57 million facility built to resemble a modern bioprocessing plant. Established in 2011, it is the result of a collaboration between UCD, Trinity College Dublin, Dublin City University, and the Institute of Technology, Sligo.

The IDA Ireland-funded centre trains and educates more than 4,000 people annually to work in all areas of biopharma. It also provides a test bed for new technologies and processes.

Details of the collaboration with Thomas Jefferson University are to be unveiled at the annual Biopharma Ambition conference in Dublin on Wednesday.

Speaking to The Irish Times, Killian O’Driscoll, head of projects at NIBRT, said the centre was also in discussions to form strategic partnerships in South Korea and Australia.

Thomas Jefferson University last year merged with Philadelphia University and the planned facility is the first major announcement of the combined entity. The university has almost 8,000 students and more than 4,000 faculty members.

Discussions between NIBRT and Jefferson resulted from a chance encounter between a university alumnus working for Johnson & Johnson, who brought the Irish centre to the college’s attention after attending BioPharma Ambition.

NIBRT, which this week also announced it is to receive automation software and systems valued at $1 million from US group Emerson, co-hosts BioPharma Ambition which takes place over the next two days at Dublin Castle. Delegates at the event will be told on Wednesday that employment in the sector is expected to have surpassed 30,000 last year from just 5,200 in 1988.

According to recent figures, the biopharmachem sector maintained its position as the largest exporter of goods from Ireland last year with record total exports of €67.8 billion, up 2 per cent on 2016. The sector now accounts for 55 per cent of overall Irish exports of goods.