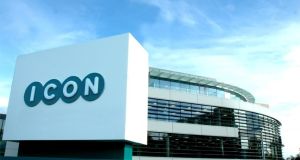 Icon’s headquarters at Leopardstown in Dublin: the company is a global provider of drug development solutions and services

Clinical trials group Icon, which employs more than 1,000 people in the Republic, recorded a tax expense of $7.4 million (€5.93 million) during the fourth quarter as a result of US president Donald Trump’s drive for tax repatriation.

Net revenue for the Nasdaq-listed company headquartered in Dublin increased to $1.75 billion on the back of a positive business environment which was reflected in net business “wins” in the fourth quarter of $599 million.

In the fourth quarter the group “significantly” reduced concentration levels of its largest customer.

“2017 was another strong year for Icon. Positive business win trends across all customer segments have diversified our business, resulting in backlog growth of 17 per cent year on year and reducing our top customer concentration to 13 per cent in quarter four from 24 per cent in the same quarter last year,” said Dr Steve Cutler, the company’s chief executive.

“We expect 2018 to be another robust year of revenue and earnings growth,” he said, adding the company has updated its revenue guidance to between $2.52 billion and $2.64 billion.

In July, the company acquired the Mapi group making Icon the world’s second largest provider of late phase services. “integration plans are under way and progressing well,” the company said.

Net income per ordinary share increased by 9.47 per cent in, the full-year results show, to $5.20.

Icon is a global provider of drug development solutions and services to the pharmaceutical, biotechnology and medical device industries. Established in 1990 by Dr John Climax and Dr Ronan Lambe, the company employs 13,100 staff across 97 locations in 38 countries.