Putting together the pharma jigsaw 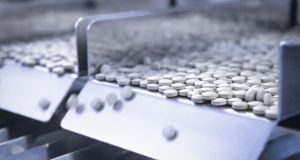 Ireland is ideally placed to help the global drug industry manage the increasingly fraught battle between scientific advance and rising costs, a conference in Dublin heard this week.

Pharma consultant Graham Symcox told Biopharma Ambition in Dublin Castle that 73 per cent of biologics approved in 2017 had availed of a expedited pathway designed to accelerate the speed to market for breakthrough modern therapies.

However, securing sufficient manufacturing capacity and the temptation for scientists to look for additional uses for such drugs is slowing down the pace at which they reach peak sales.

The challenge comes as health systems are under increasing pressure dealing with the high cost of this new generation of drugs, Dominic Carolan, the chief executive of NIBRT – Ireland’s highly regarded National Institute for Bioprocessing Research and Training – said.

The answer? According to Symcox, it’s digitisation. And that’s where Ireland comes into its own, he says, arguing that we have all the necessary pieces of the jigsaw.

Alongside most of the world’s leading drug firms we have a similar concentration of global medtech businesses developing new delivery systems, manufacturing infrastructure companies and what he called the “secret sauce” – a matching concentration of world leading IT companies that can help digitise research, administration and manufacturing to take costs out of the system.

“If we can find a way of bringing these IT data scientist specialists [into the drug development and manufacturing space] we have a path to the future,” he said.

And he had words of praise too for NIBRT which, he said, “really is a jewel – the place you go globally for top training capability”.

Having just signed a $10 million deal to replicate NIBRT’s success stateside at Jefferson University in Philadelphia earlier this week, the UCD-based training centre will hardly care if its status as one of the conference organisers had anything to do with that glowing testimony.

The only surprise, really, was that there wasn’t a Minister in sight to take the credit.