Expansion will focus on diagnosis of life-threatening and infectious conditions 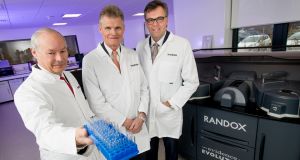 Randox Laboratories plans to invest £50 million (€56.5m) to establish three new centres of excellence in the North that will focus on diagnosing life-threatening conditions and infectious diseases.

Scientists from the Antrim-headquartered group, which specialises in healthcare diagnostics, will work collaboratively with researchers and scientists from both Queen’s University and Ulster University in the new centres.

Dr Peter FitzGerald, the founder and managing director of Randox, believes accurate diagnosis at the earliest stage of any illness is a “game changer” for patients.

The company’s new centres will focus on clinical diagnostics, engineering for biosciences and quality control to deliver early diagnostics for a range of conditions.

Randox has an established track record in the development of diagnostic tests to identify those at risk of certain illnesses, for example Alzheimer’s disease or genetic cardiac conditions. It has also launched a new clinically-approved test to diagnose prediabetes.

Randox was established by Dr FitzGerald in 1982, and remains privately owned. The group employs more than 1,400 people, and has manufacturing and research development operations in Antrim, Co Donegal, India and the United States.

Dr FitzGerald says it is time for a radical change in the way healthcare is delivered, with “sophisticated diagnosis” to help spearhead that change.

“Through early intervention we can restrict the development of chronic conditions and improve people’s lives.

“Our view of the future is one where people are empowered through earlier diagnosis to stay healthier for longer, and where healthcare systems are freed to deliver quality services to patients.”