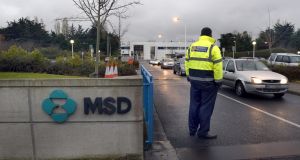 Pharma group MSD has announced plans for a new biotech facility in Dublin in a move that is expected to create 350 jobs.

The plant will be built on the site of its former women’s healthcare product business in Swords.

MSD’s US parent, the drug giant Merck, is looking to ramp up global manufacturing capacity for its blockbuster cancer therapy Keytruda. At present the group has only one immuno-oncology manufacturing base, with the rest of its supplies delivered by contract manufacturing partners.

“We need to have confidence in supply,” he said.

MSD expects the new facility to be operational in 2021 and fully certified by 2022. “It’s a bold statement by MSD,” said Mr Brennan, “but that’s our target.”

The Swords investment will be a “significant component” of the €4 billion capital expenditure plan outlined by the US group earlier this month, Mr Brennan said, although MSD did not disclose the amount of its investment.

The company had put the €25 million Swords site on the market last year after it transferred the long-standing women’s health products business from the site to the Netherlands. It had expected that the 33-acre location would appeal to a rival pharma business.

However, Mr Brennan said its history as a pharma site, on site infrastructure and the prospect of an uncontentious planning process meant it came back into consideration when Merck decided to locate the new Keytruda plant in Ireland. Its location, close to both the M50 and Dublin Airport, was seen as another plus for a business that will be producing for the global market.

The MSD executive said the new biologics plant would be “built within the box” - ie within the footprint of the existing buildings on site with the exterior walls of the current units knocked down as that process is completed.

MSD said that the decision to locate the new facility in Ireland was testament to the talent of its Irish employees and reinforced the company’s commitment to Ireland.

The drug group currently employs over 1,700 people across four sites in Ireland – in Carlow, Cork, Dublin and Tipperary. It announced plans to hire 330 new staff in Carlow and Cork in a €280 million investment last year. It also committed €40 million to its Ballydine plant in Tipperary.

Commenting on the announcement, the Minister for Business, Enterprise and Innovation, Heather Humphreys said: “MSD has been a tremendous success story in this country with plants located in several centres, providing valuable employment.”

She said the new biotech plant would “deepen the great partnership between the company and Ireland”.

MSD announced the winding down of the women’s health operations in Swords site back in 2013 and it finally closed in September 2026. At its peak, the US group employed more than 570 people on the site, though this had dwindled to around 50 by the time the unit was shuttered.

The company’s Irish operations had a turnover of €4.7 billion in 2016.