Investors taking a punt on Greece are being rewarded 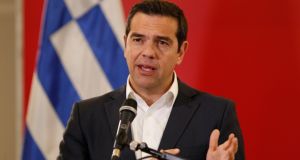 Investors taking a punt on the most-indebted nation in Europe are being rewarded.

Greek bonds have returned over 20 per cent this year to those willing to take the risk of holding the junk-rated and illiquid debt, the best performance in the euro area.

The rally may have room to run as this weekend’s elections look set to bring a more market-friendly government to power in Athens, and beyond that there’s the prospect of European Central Bank stimulus.

“The Greek economy has turned the corner and elections could pave the way for a more pro-reform government,” said Alberto Gallo, a money manager in London at Algebris Investments, which favors bonds maturing in five years or longer.

Investors are no longer just confined to those who specialise in distressed debt. More conventional funds are either betting on the Greek recovery from years of crisis, or are just hungry for anything that has a positive rate as more and more of Europe’s bonds join a record global pile of negative-yielding debt.

Fund manager Charles Diebel is not joining the rush. He was staying in a hotel in Athens during Greece’s financial crisis and it was enough to put him off ever buying the country’s bonds.

“Yield is yield,” said Diebel, the Ireland-based head of fixed income at Mediolanum S.p.A. “But I was in Athens during the crisis and stayed in the same hotel as European Union members of the troika – talking to them put me off forever.”

The troika was used to describe the trio of institutions – the European Commission, European Central Bank and the International Monetary Fund – that imposed stringent austerity on Greece in return for bailouts.

At the height of the euro-area financial crisis, yields sky-rocketed amid fears that the Mediterranean nation would become bankrupt and tumble out of the EU. The country has had to rely on about €300 billion ($338 billion) in foreign aid since 2010.

Those days now seem far away for many. Ten-year yields are hovering around 2 per cent, compared with a crisis high of 44 per cent, while the Athens stock market has been the world’s best performer this year.

Greece’s stock of debt currently amounts to around 180 per cent of economic output, compared with 132 per cent in Italy.

After ending its bailout program last summer, Greece tapped the market for €2.5 billion of five-year bonds in January. The success of that sale paved the way for a syndication in March of 10-year debt for the first time in nine years.

Now, centre-right party New Democracy is topping the polls ahead of Sunday’s election and is expected to garner nearly 40 per cent of the vote. Prime Minister Alexis Tsipras’ Syriza party is trailing, with support at around 28 per cent.

Bank of America Merrill Lynch forecasts economic growth of around 2 per cent this year and in 2020, and recommends that investors position for Greek bonds to rally further relative to their German peers.

“We would expect a New Democracy government to be more positive for markets than a government coalition,” wrote Bank of America strategists led by Ruben Segura-Cayuela. “We see more potential ahead as the search for yield extends.”

Even though Greece is not currently eligible for the ECB’s asset-purchase program, given its junk status, the prospect of further quantitative easing is another potential boon.

Since IMF chairman Christine Lagarde is lined up to succeed Mario Draghi as ECB president, that makes it more likely Greece could join in coming years, according to Diebel.

“Lagarde is a pragmatic dove,” he said. “That rule can easily be amended.” – Bloomberg