Chances of another recession in Ireland 100%, says NTMA chief 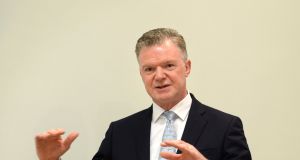 Conor O’Kelly: “People talk about whether the bond markets are predicting a recession. I’ll give a prediction. The chances of a recession in Ireland are 100 per cent.”

The chances of another recession in Ireland are 100 per cent, as the country is a small, open economy, highly-indebted, and relying on international investors for 90 per cent of its borrowings, according to the head of the National Treasury Management Agency (NTMA).

Answering a question from Sinn Féin TD David Cullinane about the chief financial risks facing Ireland, the NTMA’s Conor O’Kelly said: “We’re in the permanent contingency business in Ireland with the debt that we have whether it’s Brexit or Italy or something we can’t even think of today that will end up hitting.

“People talk about whether the bond markets are predicting a recession. I’ll give a prediction. The chances of a recession in Ireland are 100 per cent,” he said.

“We can’t afford not to have a contingency in place and we have to remain vigilant to that and we do that by having significant cash buffers at all times and by smoothing the profile of the [national] debt.”

He told the Public Accounts Committee that, since 2015, the NTMA had issued €67 billion of long-term debt, with an average maturity of more than 14 years.

“This means that over 50 per cent of Ireland’s total outstanding marketable debt has been refinanced in the past four years,” he said.

This was made significantly easier by the ultra-low interest rate environment, Mr O’Kelly said.

He also noted that the nomination of Christine Lagarde as Mario Draghi’s replacement at the helm of the European Central Bank (ECB) was a major positive for Ireland and the NTMA’s management of Ireland’s monster €205 billion debt.

Her nomination reinforced expectations of monetary policy easing in the bloc, he said.

Long-term rates tumbled across Europe following the announcement of Ms Lagarde’s nomination, and Irish 10-year bond yields fell to a record low of 0.03 per cent on Thursday.

This means borrowing an additional €10 billion will cost the Irish Government just €3 million per annum to fund for the next 10 years, compared to a peak cost during the financial crisis of €1.4 billion.

Germany’s 10-year government bond yield, a benchmark for euro-zone debt, fell to -0.4 per cent and matched the European Central Bank’s deposit rate for the first time – a sign that markets are expecting rate cuts.

“By refinancing this debt early, we have effectively taken out insurance against potential future interest rate increases,” Mr O’Kelly said.

However, he warned the Republic’s debt remained “elevated” and paying it down was “of paramount importance in reducing the State’s financial risk”.

“Whilst the day-to-day signs of financial distress that were all too prominent a decade ago have, thankfully, largely disappeared, the underlying legacy of that financial distress remains – and it will be with us for a long time in the form of the additional debt we took on during the crisis years,” he said.

“It is worth pointing out that today’s interest bill is still three times what it was in the period from 2003 and 2008 despite the fact that yields were on average 4 per cent then versus 1 per cent today. This reflects the scale of the debt,” he said.