Irish passport among most powerful in the world 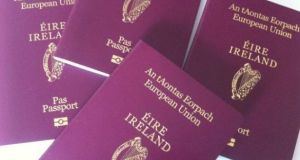 The Irish passport remains one of the most powerful in the world, according to a new ranking that shows US and UK travel documents drop in score.

The Republic of Ireland is ranked in sixth place globally when it comes to passport power, having been placed between 4th and 7th over the last decade.

This is according to the latest Henley and Partners Passport Index, which ranks countries according to data from the International Air Transport Association.

The Irish passport is considered one of the most prized in the world because it offers visa-free travel to 183 countries.

Paddy Blewer, group public relations director at Henley, said he expected the Irish passport to continue to be highly sought in the coming years.

“Given the fact that Ireland is stable both economically and politically, is a core member of the European Union and is a safe country, the Irish passport will continue to be highly sought,” Mr Blewer said.

According to the latest index, Japan and Singapore have the most powerful passports in the world currently with citizens able to access 189 destinations without a visa. South Korea, Finland and Germany round out the top-five nations.

The United Arab Emirates has entered the index’s top 20 for the first time, having more than doubled the number of destinations citizens can visit without a visa in the last five years.

With its exit from the EU now imminent, the UK’s ranking looks increasingly uncertain. The UK and US now share sixth place with the Republic of Ireland, Belgium, Greece, Canada and Norway.

This marks the lowest position either country has held since 2010, and is a significant drop from their joint-first spot in 2014.