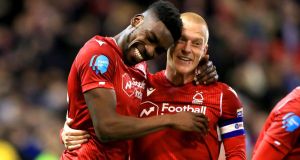 Leeds’ promotion hopes suffered another blow with a 2-0 defeat at Nottingham Forest at the City Ground. Sammy Ameobi gave Forest a half-time lead before Tyler Walker wrapped it up in added time to move Forest to within a point of their second-placed opponents.

Faltering Leeds have won just one of their last nine Championship games and are now level on points with Fulham.

It was a deserved victory for the home side, who knocked Marcelo Bielsa’s team out of their usual passing stride with their high-tempo pressing game.

Ameobi opened the scoring in the 31st minute with a powerful shot that should have been saved at his near post by Leeds goalkeeper Kiko Casilla.

Forest should have wrapped the game up nine minutes into the second half when Lewis Grabban fired at Casilla with the goal gaping.

However, Walker made the points secure from close range after Jack Harrison was caught napping.

Leeds, who were 11 points clear of third place earlier in the season, had to wait until 75 minutes to get a shot on target when Liam Cooper headed straight at Brice Samba.

James McClean opened the scoring as Michael O’Neill’s Stoke side moved clear of the Championship drop zone with a 3-1 win at home to fellow strugglers Charlton.

The Potters went ahead in the 28th minute when Ireland international McClean tapped home at the back post before Ben Purrington equalised just before half-time.

Tom Ince regained the lead for the home side before Nick Powell secured the points with a third as Stoke leap-frogged their opponents in the table.

Aleksandar Mitrovic struck the only goal as Fulham put pressure on the top two in following a hard-fought 1-0 win at Blackburn.

The Serbia international converted Joe Bryan’s cross to break the deadlock in the 65th minute, taking his tally to 20 goals for the season.

Irish defender Darragh Lenihan thought he had levelled but was ruled offside as Rovers saw their 10-match unbeaten run at home – stretching more than four months – come to an end.

The home side took the lead in the 24th minute, Julian Jeanvier credited with the goal – given via goalline technology – following a scramble.

Lewis Wing and Ashley Fletcher twice levelled for Boro after Bryan Mbeumo’s deflected effort had put the Bees back in front.

Ollie Watkins then grabbed the winner for Thomas Frank’s side in the 87th minute, the striker also making it 20 goals for the season.

Preston climbed into the playoff places following a 2-1 win at lowly Wigan.

Goals early in each half from Tom Barkhuizen and Daniel Johnson extended North End’s unbeaten league run to five games.

Chey Dunkley pulled a goal back for Wigan, who remain in the bottom three.

Swansea’s playoff push suffered another blow as they lost 3-2 at home to Derby County to make it three games without a win.

But Duane Holmes levelled and then Tom Lawrence popped up with the winner with 10 minutes left.

The Hatters are now nine points adrift of safety as they slumped to a ninth defeat in 11 league games.

The South Yorkshire derby between Barnsley and Sheffield Wednesday ended 1-1 at Oakwell.

Josh Windass, signed on loan from Wigan, put Wednesday ahead on his debut.

But Cauley Woodrow levelled – his 12th goal of the season and third in as many games – when he fired into an empty net following a poor clearance from Wednesday goalkeeper Cameron Dawson.

Elias Kachunga and Steve Mounie (penalty) scored in the second half as Huddersfield moved six points clear of the bottom three with a 2-0 home win over QPR.

The game stopped in the 25th minute as both sets of players, staff and fans joined in a minute’s applause for former Huddersfield player Jordan Sinnott, who died recently.

Mallik Wilks’s late leveller helped Hull halt a four-game losing league run as they drew 1-1 at Reading, who had led through Jordan Obita.