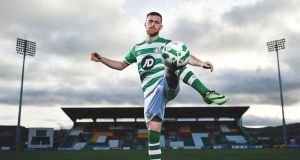 Jack Byrne didn’t play in Shamrock Rovers most recent friendly but has been training since despite what is understood to be a minor thigh strain. Photograph: Sportsfile

Jack Byrne is expected to miss Sunday afternoon’s President’s Cup game at Oriel Park with Stephen Bradley reluctant, it seems, to risk the midfielder on the artificial surface less than a week ahead of the club’s league opener against Bohemians.

Byrne didn’t play in the club’s most recent friendly but has been training since despite what is understood to be a minor thigh strain. The Republic of Ireland international is apparently keen to feature in the season curtain-raiser but Bradley is widely expected to play it safe.

The Rovers boss, who is also without Sean Kavanagh (knee) spoke this week about the desire around the club to win this game but the Byrne situation underlines the “glorified preseason friendly” status of the occasion.

Both managers would doubtless like the idea of coming out on top but the six editions played since its inception in 2014 have been about as reliable an indicator of who will go on to win the title as tossing a coin, and Vinny Perth made clear at Wednesday’s league launch that nobody in his squad will be risked if they are not 100 per cent.

Sean Murray might just get the nod as he gets back to full fitness but John Mountney (ankle), Will Patching (shoulder) and, more likely than not it would seem, Pat McEleney (thigh) will be watching on as the manager provides an early sense of how Dundalk will set up for their latest title defence.

The club’s most recent signing, Stefan Colovic, will not be involved, but there could well be game time for new arrivals Darragh Leahy, who has had a good preseason, and Greg Slogett, while Cammy Smith could play some part. Perth certainly has strong options with Andy Boyle and Jordan Flores reckoned to have made cases for more central roles in the new campaign with some good performances over the past few weeks.

Of the two sides, the win would probably mean more to Rovers as they look to lay down some sort of marker at a ground where they fared poorly in 2019, conceding five goals and leaving empty handed on both occasions.

“We didn’t cover ourselves in glory in Oriel last year,” acknowledged Ronan Finn this week as he contemplated his latest visit to his former club. “But at the Aviva, I thought we were the better side so it bodes well for an interesting game.”

The 32-year-old believes their rivals showed a bit more know-how when it mattered over the course of the league campaign. He accepts that Dundalk held their nerve impressively when they trailed by a distance in the title race but he clearly doesn’t feel the Dubliners have any cause to feel intimidated this time around.

“They weren’t blowing teams apart or playing mesmerising football but they won games and have that experience of grinding to get over the line,” he says. “There’s very little between us and Dundalk and when we’re on our game we’re a really good side.”

A more consistent campaign and a significantly better head-to-head record will be both key if Bradley’s side to erase the 11-point gap that existed at the end of the last campaign, with the manager suggesting that converting more of the chances his side creates would go a long way towards bridging that gap.

It is hard to see them racking up a big score here but even a narrow win will boost confidence ahead of next weekend when we will get to see how well they address another big issue from last season, those Dublin derbies.