Paper advocates using 12.5 per cent of betting tax to fund the grassroots game 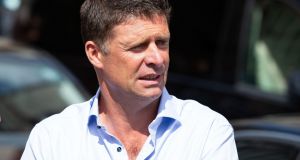 Brian Kerr and newly appointed FAI deputy chief executive Niall Quinn are to launch a policy document on the funding of Irish football with Aodhán Ó Ríordáin at a public meeting in Raheny United at 8.30pm on Thursday.

The Dublin Bay North Labour Party candidate has drawn on the pair’s expertise in putting together the document which advocates the use of 12.5 per cent of revenue from the State’s betting duty to fund the grassroots game, improve participation rates and overhaul football’s infrastructure.

The document appears to reflect many of the causes that Kerr and Quinn have championed, although rather than handing the money to the FAI much of the funding, Ó Ríordáin suggests, would be channelled through an autonomous office to specifically targeted sectors.

“It is suggested,” the document says, “that the State provide ring-fenced funding for grassroots, underage and community initiatives through a new management structure.

“Funding would focus on social inclusion, gender equality, anti-racism and integration. It is anticipated that actors within football will come forward with this model, and the State’s role will be to support and evaluate it [rather than initiate and develop it]”.

It cites examples where a similar system is already said to have operated, with that list including “The Sunderland Foundation”.

It goes on to list improved education for League of Ireland players, an increase in the number of co-funded community-based coaches and substantial investment in the women’s game as being amongst the priorities identified.

The proposal to provide funding from the betting tax as a starting point for the strategy is likely to prove popular within football.

Though there was no direct correlation between the two it has rankled with many within the Irish game that the roughly €50 million raised in duty (it was €52.9 million in 2018) before the higher rate was introduced could be seen as paying the best part of the €65 million paid out each year through the Horse and Greyhound Racing Fund.

The latter amounts to a very substantial subsidy to the racing industry which has traditionally viewed the revenue from betting taxes as its preserve despite the very great changes that have taken place in the betting landscape, primarily in relation to the vastly increased share of the market that is devoted to gambling on football.

As things stand the Government is making a “profit” on the betting tax of around €30 million – something it may well argue is going towards the wider funding of sport in its various forms – but football does seem to have a very strong case to be awarded a substantial slice of that pie at a time when there is a general acceptance that it has been underfunded.

If it gets it, though, there are a number of other sports that feature prominently in the betting markets who might just feel they should be given their shares too.