Everton revival continues at pace as Palace put to the sword 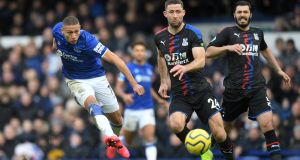 Richarlison’s superb individual goal helped lift Everton to within five points of the Champions League places after a 3-1 win over struggling Crystal Palace.

The performance included the bad – Jordan Pickford’s howler for Christian Benteke’s equaliser; and the brilliant – wonderful strikes from Brazilians Bernard and Richarlison – before Dominic Calvert-Lewin’s late goal added further gloss for the Toffees.

Carlo Ancelotti’s side moved above Manchester United and level on points with fifth-placed Sheffield United, who host Bournemouth on Sunday.

It is hard to imagine two months ago the team were in the bottom three having just sacked Marco Silva, but the turnaround the Italian has overseen has been hugely impressive.

A total of 17 points from his eight matches in charge is bettered only by near-neighbours and runaway Premier League leaders Liverpool over the same period.

Palace, however, are heading in the opposite direction with no wins and just four points in their last seven matches.

Two of those points came against Manchester City and Arsenal but they only briefly looked like giving manager Roy Hodgson his first win at Goodison Park in nine attempts early in the second half when a previously anonymous Wilfried Zaha came alive for a short spell.

He teed up Benteke for his first Palace goal since April and had Everton panicking for 15 minutes before his thunder was stolen by Richarlison racing half the length of the field to score and tip the balance back in the hosts’ favour.

Prior to that the only real piece of quality had been Bernard’s goal, the Brazilian executing exquisite controlled technique to take a Theo Walcott cross, which had just flown over the head of Calvert-Lewin, low down on the volley to beat Vicente Guaita, who had kept his place in goal despite last week’s howler against Sheffield United.

Walcott’s 50th Premier League assist was to be his last involvement as he departed to injury soon after, ending the personal momentum he had built up with his winner last week against Watford.

Zaha, on his 350th Palace appearance, had seen so little of the ball he swapped flanks to try his luck on the right and thought he had won a penalty when he cut across Pickford but the goalkeeper was adjudged to have taken the ball.

The same could not be said minutes after half-time when Zaha played in Benteke. The Belgium international’s shot had all the hallmarks of a striker low on confidence having not scored in over nine months, but he would have been delighted to see Pickford make a complete hash of trying to save it, going down so slowly he allowed the ball to go under his outstretched hands and body.

Richarlison bailed out his team-mate with his exhilarating run and finish as he raced onto Calvert-Lewin’s flick-on, holding off Gary Cahill in the process, before Pickford redeemed himself somewhat with a point-blank block from Benteke’s header.

Then it was Guaita’s turn to pull off a stunning save, throwing up a hand to deny Gylfi Sigurdsson after he weaved his way into a scoring position.

Calvert-Lewin wrapped things up late on by poking home after Richarlison’s header rebounded off the crossbar.

A late own goal by Watford’s Adrian Mariappa ensured the points were shared in a 1-1 draw with fellow relegation-threatened Brighton.

Abdoulaye Doucoure, who scored an own goal when the sides met on the opening day of the season, capitalised on a loose ball before driving the ball expertly past Mathew Ryan.

Just as Watford looked to be heading for a crucial victory, an Alireza Jahanbakhsh cross was turned into the roof of his own net by Mariappa to level the tie with just over 10 minutes remaining.

The Hornets had suffered successive defeats against Aston Villa and Everton in the Premier League before the trip to the south coast, and Nigel Pearson’s side remain in the bottom three despite claiming a point at the Amex.

The Seagulls remain without a win in the Premier League this year, but have moved one point further away from the drop zone.