Liverpool's youngsters get over the line against Shrewsbury 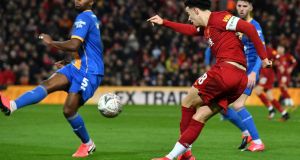 As a Liverpool youth team celebrated securing the club’s passage into the fifth round of the FA Cup it was not difficult to imagine Jürgen Klopp, with a beer and a laptop on holiday, affording himself a wry smile. His gamble, his stand against football congestion, call it what you will, had paid off. Liverpool’s young players made their own point - they were far too good for Shrewsbury and deserved the prize of a trip to Chelsea.

Shrewsbury defender Ro-Shaun Williams headed into his own net late on to hand Liverpool’s youngsters a merited victory and one that their absent manager will savour abroad. Klopp had defended his absence on the basis that a young Liverpool team would benefit more from the familiar voice of Critchley than his fleeting appearance in the technical area.

That was his argument from a coaching perspective at least, and not an unreasonable one, although the idea that the under-23s coach would be leading an under-23s team proved an exaggeration. The average age of Liverpool’s starting line-up was 19 years and 102 days.

It was the youngest starting eleven in the club’s history, surpassing that for the Carabao Cup quarter-final defeat at Aston Villa in December, and featured four debutants in Adam Lewis, Liam Miller, Jake Cain and Leighton Clarkson. They were forced to wait 15 minutes before playing in front of a capacity Anfield crowd for the first time with kick off delayed by a crash on the M62 that impacted on match traffic.

While first team players holidayed in the likes of Dubai, Maldives and Miami - though not James Milner of course, who was here for the game - Curtis Jones became Liverpool’s youngest ever captain as he led the team out a week after his 19th birthday. The teenage skipper, 16-year-old Harvey Elliott, Neco Williams and midfield anchor Pedro Chirivella, who all started the humiliation of Everton’s first team in round three, were prominent as Liverpool’s youngsters dictated the first half.

The opening 45 minutes showcased their superior technique and natural confidence, although opportunities to make it count were limited. Jones drilled a free-kick straight at goalkeeper Max O’Leary with the first shot of the game. Williams went close with a low drive that sailed just wide of the far post and saw another effort blocked by Scott Golbourne when teed up by an inviting Clarkson cross. The right-back was booked for clattering into Aaron Pierre as he cleared the danger.

Liverpool were composed, sharp and feeding off the support of the crowd. Shrewsbury were remarkably flat by comparison. Even taking their struggles in League One into account, the visitors produced an underwhelming first-half display that clearly irked manager Sam Ricketts judging by his touchline demeanour. They may have been unable to rise to the occasion due to Liverpool’s dominance of the ball but Shrewsbury also failed to make their physical advantage count or threaten Caoimhin Kelleher’s goal by any means.

Strikers Callum Lang and Shaun Whalley embarked on a few promising runs before the interval but, without support, they were comfortably contained by Liverpool’s back-line.

As in the first encounter, Shrewsbury displayed greater belief and intensity after the break to finally exert some pressure on the Liverpool goal. Their problem, but not for the tie as a spectacle, was that the hosts lifted their level too.

Williams had the majority of Liverpool’s chances despite operating on the right of defence. Trent Alexander-Arnold’s spirit of adventure has evidently rubbed off. The Wales Under-19 international swept a half volley over from a neatly worked corner and was then denied by an instinctive save from O’Leary after fine work from Elliott. The former Fulham winger released Williams with a perfectly weighted pass across the Shrewsbury penalty area. The full-back placed his shot towards the bottom corner but O’Leary saved with his feet.

Ricketts introduced Daniel Udoh for the injured Lang and the substitute made an immediate impact. It could have been defining but for VAR. Udoh’s first contribution was to spin away from Williams on the left and cross low for David Edwards as he arrived unmarked in the Liverpool area.

Kelleher kept out the captain’s shot at close range but, from the rebound, Whalley headed home to send the away fans into raptures in the Anfield Road stand. Then came the dreaded wait for VAR. It found Udoh had been offside in the build-up and instead it was the Liverpool fans who were celebrating as the goal was disallowed.

Edwards urged his teammates to keep their heads amid the deflation. Unfortunately for Shrewsbury and their hopes of a lucrative trip to Stamford Bridge in the next round, Williams used his with telling consequences.

There were 15 minutes remaining when O’Leary threw the ball towards substitute Jason Cummings, Shrewsbury’s two-goal hero last time out, but Liverpool’s Williams intercepted easily. He returned the ball deep into the Shrewsbury area where the central defender, unaware that his goalkeeper was coming to collect, headed over O’Leary and into his own net. The kids were through, deservedly so.