Brexit - it’s as if in football, as elsewhere, they didn’t think it through

Britain’s exit from the EU throws up many questions, and maybe some opportunities 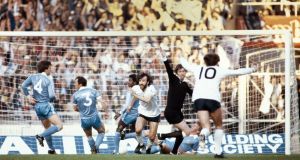 Brexit is now a noun with a past. When Britain joined the then EEC in the 1970s, we couldn’t countenance staying out; now, we wouldn’t countenance getting out. Even after the formation of our State in the 1920s, our socio-economic dependence on Britain, meant that our independence was partial.

It wasn’t, for example, until the late 1970s, when we took the decision to join an EEC-wide exchange rate mechanism, that formal ties were broken between our currency and the British pound.

Around the same time as our currency was being influenced by EEC membership, another reform from Europe was beginning to have an impact on one of our more significant exports to Britain – our footballers.

Throughout the 1970s, decisions by the European Court of Justice (ECJ) indicated that the ban on footballers from one member state from playing professionally in another member state, a feature of virtually all major leagues in Europe at the time, was contrary to fundamental principles of free movement of workers and labour within the EU.

The Football Association (FA) in England, backed by the players’ union, had one of the longest and most established bans in place. The FA’s ban on foreign players dated to 1930 when legendary Arsenal coach, Herbert Chapman, had attempted to sign Austrian goalkeeper Rudy Hiden. The FA subsequently brought in what would now be called a residency rule and which mandated that players who were not “British-born subjects” could only be signed by a team if they had been living in England for at least two years.

The most celebrated example of someone qualifying under this rule was the German goalkeeper Bert Trautmann, who uniquely fulfilled his residency requirement in a prisoner of war camp in Lancashire.

ECJ rulings led to the FA’s restrictive rules on foreigners being relaxed in 1978. Tottenham decided that the relaxed rule extended beyond the EU and promptly signed World Cup-winning heroes Ossie Ardiles and Ricky Villa from Argentina. It remains a great irony that one of the most iconic goals – Villa’s for Spurs against Manchester City in 1981 – in one of the most quintessentially of English sporting competitions – the FA Cup – come from an assist by the EU.

Concerned about the impact that foreign players would have on their national teams, the larger leagues in Europe, notably Italy, initially sought various ways of circumventing EU law and for a while in the 1980s and 1990s, Uefa competitions only allowed clubs to have three foreigners plus two “assimilated” players in their squads.

This quota system is known to legions of Manchester United fans as the Gary Walsh rule, when, in 1994, the rule meant that United had to drop Peter Schmeichel in favour of Walsh for a crucial Champions League game in the Nou Camp – they were thrashed 4-0.

A year later and the quotas were no more when one of the most celebrated sports law cases of all – the ECJ’s Bosman ruling – effectively opened football transfers on a global scale.

Irish footballers in England remained largely unaffected by these legal developments because, bluntly, Irish players were never really considered foreign. Exceptions from immigration law – the common travel area – were one of the first agreements concluded between Britain and the Irish Free State. Moreover, the view lingered in Britain that when it came to football and other sports we remained one of the “home countries” encapsulated by the fact that for decades the pejorative shorthand for the Irish national football team was “Éire”.

That perception remains: ask any reasonably knowledgeable English football supporter the name of the country that first beat England at home and they’ll likely answer Hungary and then speak of Puskás and the Mighty Magyars at Wembley in 1953. The correct answer is of course Éire who beat England at Goodison in 1949, the year we became a Republic.

Nine of that team played professionally in England – Tommy Godwin, inspired in goal, and Tommy O’Connor were with Shamrock Rovers. Before and since, thousands of young Irish players have taken the well-worn path to Britain seeking to make it as professionals.

And now, the fallout from Brexit could see that path blocked for Irish teenagers and the impact for Irish football could be immense.

The issue relates to Article 19 of Fifa’s transfer regulations which bans international transfers of players under the age of 18. Various exceptions are in place, notably that transfers for players between the ages of 16 to 18 are permitted if the transfer is within the territory of the European Union (EU) or European Economic Area (EEA). As the UK leaves EU, that exception falls away for transfers of such players from the Republic of Ireland.

While the common travel area and other legal arrangements mean that Irish citizens are eligible to work in the UK, industry qualifications for football are set by Fifa. As we have seen before this is where it gets tricky.

For example, in 1998, the Good Friday Agreement held that if you are born in the North, you can be British or Irish or both. That seemed to resolve the issue of whether players born in Northern Ireland could declare for the Republic. But under football “law” that was not automatically the case and it took a hearing at the Court of Arbitration for Sport in 2010 involving Belfast-born Danny Kearns, to finally sort out the issue and even then only on exclusive application of Fifa’s laws and not those of an international treaty.

The same applies here unless Fifa amends its regulations post-Brexit – not forgetting that the ban applies not just to Irish talent but to all EU/EEA countries. The added internal UK-complication is that strictly speaking transfers into England from Scotland, Wales and Northern Ireland are, under Fifa regulations, also from separate national associations. Even within England there is ongoing tension between the Premier League, which wants to maintain an open, international policy on transfers, and the FA and the Football League who want to use the post-Brexit era to further promote “homegrown” talent.

Brexit – it’s as if in football, as elsewhere, they didn’t think it through.

There is of course an argument that all of this will be a good thing for Irish football and that the teenagers in question will have to remain at home to the benefit of the League of Ireland. Do, however, League of Ireland clubs currently have the capacity to provide young players with a home for their talent? Or might an unintended consequence of Brexit be that English club scouts and agents will simply look at even younger players?

There is a lot in this one issue – from training compensation left unpaid to Irish clubs for developing players, to unregulated agents and the empty, unrealised promises of support and education given by some academies in England.

It is this daily, grinding administrative burden that the next CEO of the FAI will have to deal with but with vision there is post-Brexit potential here.

In the 1970s, we followed where Britain went. It took a while but now we largely follow our own path. Will football in Ireland soon do the same, thanks also and again to Europe?