Klopp to watch Liverpool’s FA Cup replay on a laptop

Neil Critchley will lead a team of ‘under-19s, under-20s at best’ against Shrewsbury 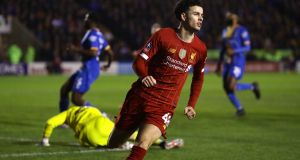 Liverpool have arranged for Jürgen Klopp to watch their FA Cup replay against Shrewsbury on a laptop while he takes a mid-season break and Neil Critchley takes the team at Anfield.

Klopp will be absent from the fourth round tie on Tuesday night, along with all of his senior squad, having taken a pre-arranged break and what he also admitted was a stand against fixture congestion in English football. He will be able to watch the game on a laptop connected to LFC TV’s live feed.

Critchley, Liverpool’s under-23s coach, will instead lead a team of “under-19s, under-20s at best” against the League One side in front of more than 50,000 supporters. Liverpool have sold their entire allocation of tickets, reduced to £15 for adults and £1 for juniors, and Critchley insisted Klopp had earned the right to miss a replay that clashed with the Premier League leaders’ rest period.

He also expects Klopp to get in contact during the game should he see fit, having done so during the Carabao Cup defeat at Aston Villa when Liverpool also deployed a youthful team under Critchley with their first team squad away at the Club World Cup.

The Liverpool coach revealed: “Jürgen sent through a message at half-time [against Villa], which I have to say was brilliant at that moment. Even though we were going off the pitch thinking ‘We’ve played all right there but we’re getting beat 4-0’ it creates that element of doubt in your mind about whether you are doing the right thing and if you need to do something different.

“So when you get a message from the manager saying; ‘Don’t change anything, carry on doing what you’re doing, you’ve been brilliant’, it clears all that doubt in your mind and you can give that message to the players. The message killed every doubt and settled them right down. It helped everyone at that moment. I didn’t have my phone on me but the message came through one of the staff. That option is available tomorrow but that’s up to the manager.

“Another great quality of the manager is he trusts people to do their job. The best support he gives the players is he gives them an opportunity. I don’t know what more support you could wish for as a young player. I know there has been a lot spoken going into the game, but there has been total clarity around the decision and we all support the decision. We all follow him because he has earned that.”

Curtis Jones, who turned 19 only last week, is in line to captain Liverpool for the first time and Critchley admits his players must cope better with Shrewsbury’s physical strength than they were able to at Villa.

“When you are playing against men who are fully matured and developed physically they have an advantage,” he added. “But maybe we can play our way and take that advantage away a little bit. If our boys want to have a career in football then they need to cope with that side of the game and with nights like this.”