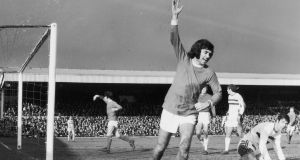 The meticulousness with which even the lowliest football clubs prepare for matches these days makes Northampton’s meeting the day before their FA Cup fifth-round game against Manchester United 50 years ago seem endearingly quaint. Convening in the County Ground boardroom for sherry, the fourth division side’s players were on a promise of a £15-a-man bonus if they could beat their top-flight opponents. Hopeful of an upset, they settled down to be briefed by the club’s scouting department, an elderly local gentleman who had gone to watch United’s most recent match.

Facing players of the calibre of Paddy Crerand, Bobby Charlton and Brian Kidd the prognosis was bleak, he told them, but if they could “nobble” Charlton they might have a chance. Sadly, Northampton’s reconnaissance man failed to mention that a 23-year-old by the name of George Best would probably be lining up against them, as the Ballon d’Or and European Cup winner had been serving a month-long ban when the scouting mission was carried out. It would prove, with the benefit of hindsight, quite the oversight.

Some weeks previously, Best had incurred the wrath of the Football Association for kicking the ball out of referee Jack Taylor’s hands at the end of a League Cup match against Manchester City and been suspended for a month. It was a punishment the mercurial midfielder deemed excessive and attributed to the FA’s disapproval of his playboy lifestyle. He was further peeved by mutterings that during a subsequent five-match unbeaten streak, Manchester United were much improved in his absence.

“While I’ve been suspended I’ve had letters from cranks saying that the team played better without me,” he said. “I felt if we were beaten by Northampton, people would say it was my fault.”

Despite struggling against their lowly rivals for the first 20 minutes of the game played on February 7th 1970, United ran out 8-2 winners. Best, on a mission to prove his detractors wrong, chipped in with the winning margin of six goals. “I don’t really class myself as a footballer,” he said in the aftermath of the game. “I call myself an entertainer. I know a lot of people have paid to see me do something spectacular and that’s what I was trying to do on Saturday. It’s my job to do something that will send people away feeling that they’d like to see me play again.”

And how. Putting his heroics into context in the following Monday’s Guardian, Albert Barham revealed that Best was the fourth player to score six in an FA Cup match. His double hat-trick wasn’t even a record, he noted, as Bill Minter had scored seven for St Albans against Dulwich Hamlet in the fourth qualifying round in 1922 – and still finished on the losing side. A little under two years later, Ted MacDougall would eclipse these feats by scoring nine for Bournemouth in an 11-0 first-round win over Margate.

In the Observer the day after United’s win, John Heilpern had been effusive in his praise for Best. “His unique contribution made the suggestion that United play better without him look simply insane,” he wrote. “To have seen Best score those six goals is to have seen genius.”

A capacity crowd of 21,711 was wedged into Northampton’s three-sided stadium, but few had a better view of their team’s main tormentor than Kim Book, the Northampton goalkeeper. “I have to hold my hand up for two of the goals but the rest were brilliant,” he later conceded. “When the fourth went in I thought we might just have our backs to the wall. They were a tremendous side. We all felt it was just an honour to be on the same park.” Book, the brother of Manchester City’s captain, Tony, had received a pre-match call from his sibling. “If you haven’t got anyone who can take care of George, you might have a bit of a problem,” he was advised.

On match day, the sun was out but the County Ground was a quagmire, with the pitch markings practically indiscernible and barely a blade of grass to be seen. Best, unfazed by the uneven terrain on which he was forced to work his magic, at times seemed to glide above it as he set about almost single-handedly dismantling the Cobblers.

His opener was a gift, Book letting a Kidd cross from the right sail over his outstretched arms and leaving United’s No 7 with a straightforward back-post header towards the Hotel End. Latching on to a through ball from Crerand, the faintest of touches took him past Book before he fired a low diagonal shot into the corner for his second. Kidd, who scored United’s other two goals, turned provider again for goal number three, with Book weakly palming his cross into the path of Best, who roofed it at the second attempt despite the best efforts of three defenders attempting to block its path from six yards. No longer bothering to celebrate, he converted another Kidd cross after getting in front of his man to skim a deft near-post header home for his fourth.

Northampton, 5-0 down after Kidd added to United’s tally by stabbing home from a corner, decided to implement their original gameplan by nobbling Charlton, who was forced off with an injury and replaced by Francis Burns. Joining his muddied colleagues, the substitute cut a decidedly incongruous figure in his pristine red and white kit as, with his first touch, he sent Best haring through the middle past two defenders before slotting his fifth and United’s sixth past the increasingly forlorn Book.

An exchange of goals – Kidd’s second and a consolation for Northampton’s Dixie McNeill – preceded the pick of Best’s half-dozen. Collecting a pass from Crerand on the edge of the penalty area, he ghosted past a defender with a little feint and left Book on his backside gazing in admiration as he spanked home his sixth from a couple of yards. Exhausted, he leaned against the adjacent upright for support as the home crowd acknowledged his genius.

“I remember thinking George was going to go one way but he dropped his shoulder and went the other and by then I was already on the deck,” Book recalled. “He was just too good for me.” A subsequent Frank Large header doubled Northampton’s tally.

Northampton’s chairman, a local pharmacist by the name of Eric Northover, was not as magnanimous as his players or the home crowd. “It was disgraceful,” he fumed. “To lose 8-2 on your own ground is unforgivable. Six of the Best? I would call them six of the easiest.” In the immediate aftermath of a performance that would earn Best an invitation to 10 Downing Street from the prime minister, Harold Wilson, Best and Crerand adjourned to the Northampton dressing room to commiserate with their traumatised opponents. “They sat down with us and George said: ‘Don’t worry about it, mate. There wasn’t much you could do.’ He was a gentleman,” Book recalled. Floating above a Northampton bog on a February afternoon a half-century ago, there was little or nothing George Best could not do. – Guardian