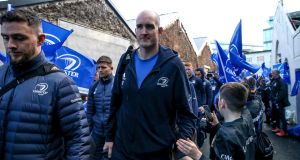 Nobody wants to flog a dead horse but neither does Devin Toner want the perception to exist that he’s no longer a thoroughbred. Only 33, the towering Leinster lock has been recalled to the extended Ireland panel ahead of the Six Nations.

Equally, nobody can anyone deny Toner’s injury disrupted 2019 forced him to trade largely on reputation during a World Cup pre-season.

Eventually he was going to have to give his perspective on being dropped. This wasn’t any old selection call, here was the discarding of the main structural pillar in Ireland’s set-piece throughout Joe Schmidt’s six years as national coach. Toner didn’t see it coming. Maybe he was a patsy; a misguided warning for the rest of an unravelling squad following the Twickenham humiliation.

“The conversation that I had with Joe was: I wasn’t going because they needed a tighthead lock and that I didn’t show enough in the pre-season games. And then coming to the tail-end of the conversation, he mentioned something about a high hit but like, he never used it as an excuse that I wasn’t going or why I wasn’t getting picked. So when I saw that, to me that’s maybe an excuse, do you know what I mean? I don’t know.”

Toner was never cited for contact with Wales’ Rob Evans in the Cardiff warm-up. Also, the selection of Jean Kleyn as the main reason for his exclusion still does not add up, simply because Munster’s South African was unused in key matches against Scotland, Japan, and the quarter-final thrashing by New Zealand.

The further we move away from it, the worse the decision looks.

3-1 - The result for French clubs against Irish provinces in Champions Cup rugby over the weekend.

Reality bites for Ulster and Munster

European success without a rampaging Fijian suddenly seems impossible. As Virimi Vakatawa all but shredded Munster’s season, Johann van Graan’s side proved once more that bravery and commitment cannot compensate for a lack of quality.

Progress is evident by how a team loses in France. Injuries to Marty Moore and Will Addison in quick succession did not help but in the face of surging runs by Alivereti Raka and All Black George Moala the Ulster defence was eventually broken.

Bryn Cunninham’s assertion, in an interview with The Irish Times last week, that the province remains a few rungs below the top “four of five” teams in Europe proved true. It will be another “three years” before they will be able to put their faith in Ulster born players and less reliant on those who didn’t make the grade at Leinster.

In the meantime perhaps Bill Johnston - Munster are missing the Tipperary born outhalf - could be the man to drive Ulster to a Pro14 title over the skillful yet limited Billy Burns.

“I was just on the couch with my wife, Mary, and we were watching TV and the name (Schmidt’s) came up and I just showed it to her and I was like: ‘What’s this?’ I went to the kitchen and took the phone call and that was it. I went back in and she couldn’t believe it either. That was it.” - Devin Toner on his exclusion from Ireland’s World Cup squad.

Are Saracens still in breach of the Premiership salary cap?

CEO Edward Griffiths has stated some players could be shipped on - potentially Liam Williams and George Kruis - to decrease the wage bill. This suggests the champions of England and Europe are still operating outside the rules.

“I think the first step is really to demonstrate, unequivocally, that we are operating within the salary cap in the current season and that is really a challenge on two levels,” said Griffiths. “It’s a challenge with spreadsheets and calculators and the numbers, but it’s also a challenge in terms of perception.”

Really, Mr Griffiths, the challenge is transparency. How can it be fair for Sarries to even potentially operate outside regulations their rivals are adhering to?

American sport avoids the same problem because anyone can pull out a calculator and add up roster salaries down to the dollar and cent.

The RFU and Premiership should follow the advice of Lord Dyson - chairman of the panel that found Saracens guilty of breaching the salary cap - and publish his full written judgment. Dyson described the lack of transparency as “unhealthy.”

“We are only obliged to show compliance with the salary cap at the end of the year but we recognise there are special circumstances,” Griffith added. “I am currently examining what the scope of any issue is, and there are two ways of dealing with it. You either reduce your head count by letting people go or alternatively you reduce the salaries of those already there.”

In the meantime, Saracens get to keep rolling out a star studded squad that could knock Munster out of the Champions Cup.