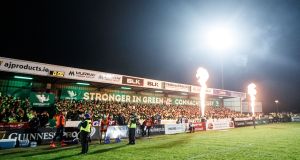 Here’s something about Connacht Rugby. It has added pride to Galway and the west. It has injected life into a great city, especially on European match nights.

It has evangelised the sport across the western seaboard. It has welcomed New Zealanders, Australians and Pacific Island players in the best possible way, in the way Irish players, if they went to Apia or Christchurch would like to be drawn to the bosom.

Connacht has made strangers feel local, put them at ease and encouraged them to be part of the community. It has been a beautifully intoxicating antidote to racism and exclusivity and xenophobia.

It has been a cradle of can-do and the type of big thinking that makes relatively small places significant and relevant. It has made people north to Clifden and beyond feel proud of the club, proud of the way it speaks and comports itself, proud of its values.

Connacht Rugby has risen from the position of doormat at the IRFU offices in Lansdowne Road to have drawn down the equivalent of winning the National Lottery. So we can also mention staying power, endurance and heart. Twenty million boys.

Here’s what the statement said when the good news of €10 million from Rosser & Co to develop the Sportsground landed on Friday at 12.38pm.

“The successful applicants were decided following a rigorous assessment process ... The fund provides a robust and transparent mechanism for the allocation of funding to develop the best high-quality sports facilities across all regions.”

At 5.03pm a second email dropped. It broke over the sports desk like Aileen’s washing over some novice Lahinch surf school dude.

“The Government has today announced a total of €20m to Connacht Rugby’s Sportsground redevelopment project. The €10m allocated under the Large Scale Sports Infrastructure has been matched with a further €10m commitment, as announced by Government Chief Whip Sean Kyne TD.”

Welcome to election year boys. How to magic up €10 million. Can a heavy honcho in the party whip €10 million out of the health pot to build, say, a Velodrome in Abbotstown because cycling is good for you? Can €10 million be siphoned from fisheries to build a swimming pool in Killybegs? No need when you have the Project Ireland 2040 plan. What? Yeah that.

Where could, say, the 20X20 Women in Sport campaign find other fund-funding? Maybe the ladies just aren’t whispering in the right ears. Here was last September’s announcement.

Take what you are given ladies. Traduced, vilified, denigrated and objects of derision in sport for, give or take, 100 years. Be nice.

But €20 million boys. Twenty f**kin’ million. How do you do it? Just over 40 professional players in the squad plus the academy plus staff. What’s the secret? Surely it couldn’t be as simple as the Chief Whip Kyne, Minister of State for Gaeilge and his Galway West constituency.

No, no, no that craic went out years ago, long after we were all just swamp donkeys trying to make sense of how sports funding actually worked. That went out when the transparency came in. You see a problem arises because if money goes somewhere, then it doesn’t go somewhere else. Call it what you want. There is just one pot.

The hockey girls got a bit of the other fund-funding when they made the final of the World Cup. Minister Ross suggestively mentioned €1 million and they all swooned. Never heard of anybody giving them that much money before. Of course it wasn’t all for them, silly things. Just a piece of it from some other fund. What? Yeah that.

There will be a lot of people wondering just how the Connacht boys pulled it off. There are Irish sports that are larger than the IRFU’s Connacht Branch but do not have the political savvy or money to make such huge financial commitments to capital programmes because, unlike Connacht Rugby, a professional franchise, they are amateur and run by volunteers. There’s an irony.

So welcome to election year 2020 folks. Don’t forget to ring your local representative and remind them that you don’t just want your rightful funding, which comes from your tax euro. Tell them you want some other funding-funding as well. Twenty bleedin’ million.