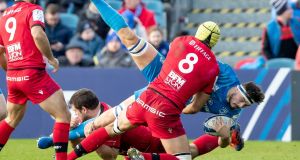 Leinster’s Max Deegan is tackled by Francisco Gomez Kodela and Virgile Bruni of Lyon during the Heineken Champions Cup game at the RDS. Photograph: Morgan Treacy/Inpho

The result will be satisfactory, the performance less so, as Leinster recorded a fifth straight Heineken Champions Cup victory in this season’s tournament, scoring six tries in the process and maintaining their quest to be top seeds going into the final round of pool fixtures next weekend.

It was a fitful display for the most part in front of 18,138 supporters on a perfect afternoon weather wise at the RDS, individual excellence glossing over periods of sloppiness in terms of the team dynamic, with some passive defence and questionable decision-making in attack, particularly in the opposition 22.

Lyon, a team that arrived without a host of first-choice players, lost three players to yellow cards during the match, yet still managed to score a couple of tries and only really disappeared when running out of energy in the final quarter. Their spirit in defence deserves credit, but if Leinster had been sharper then the disparity in quality between the teams would have been reflected on the scoreboard.

The satisfaction for Leinster head coach Leo Cullen will centre on some excellent individual displays, Max Deegan, thoroughly deserving of his man-of-the-match accolade. He was outstanding, while Garry Ringrose, Robbie Henshaw, Dave Kearney (two tries), Ross Byrne and Rhys Ruddock were others who sparkled in the winter sunshine.

Luke McGrath was lively, so too Tadhg Furlong while the bench allowed Leinster to raise the tempo that yielded a couple of late tries.

Leinster had two tries chalked off in the first half, both at the behest of the television match official Ian Davies. The first came when Luke McGrath was correctly adjudged to have strayed in front of Dave Kearney’s beautifully weighted chip; the second when there was an alleged knock-on in the build-up to Scott Fardy’s effort, less obvious, and with the suspicion that it had gone forward off a Lyon player.

The home side will be disappointed that they weren’t more precise and ruthless in finishing off some excellent approach play and that there was a soft underbelly to aspects of their defence that allowed a gutsy Lyon side to trail by just seven points at the interval. Leinster’s individual excellence wasn’t matched by collective cohesion. Leinster were utterly dominant everywhere except the scoreboard.

Leinster might have had a couple of tries by the time that Dave Kearney grabbed their first on nine minutes. Lyon were penalised for an illegal sack from a Leinster lineout maul, Byrne shaped to kick to the corner but pirouetted and delivered a pinpoint cross-kick to James Lowe, who fed the supporting Kearney. Byrne added the conversion.

Four minutes later and Cullen’s team grabbed a second try, McGrath with a fine break and offload to the supporting Josh van der Flier who eased his way past one tackler and dragged another over the line. Byrne posted the conversion. Leinster were cutting the visitors to shreds, Ringrose and Deegan particularly prominent, but imprecision was to prove costly.

On 21 minutes Byrne had his inside pass to Rhys Ruddock picked off by Lyon number eight Virgile Bruni, who showed good pace to run in from 35 metres, Jonathan Pelissie kicked the conversion and remarkably the French side were in touching distance at 14-7 despite initially appearing that they were going to be swamped.

Fardy’s disallowed try proved a brief respite for Lyon as Dave Kearney grabbed his second on 31 minutes, again combining with Lowe. Byrne added a conversion, Ethan Dumortier received a yellow card, the visitors guilty of persistent offending, and Leinster looked like they’d have the bonus point secured by half-time.

However the concession of a couple of quick-fire penalties, brittle tackling and Lyon’s power up front eventually told when secondrow Hendrik Roodt forced his way from close range, Pelissie again adding the conversion. Leinster again turned over possession from a misjudged re-start and bizarrely spent the last two minutes trying to preserve their first-half lead.

Lyon would have been hugely encouraged by their 21-14 interval deficit and the fact that their second try came at a time when they were down to 14 players with Dumortier in the bin. Leinster had a third try disallowed, again rightly so, as Lowe’s one-handed pass to Van der Flier drifted forward. The French side continued to infringe, replacement Felix Lambey the next player in the bin.

The home side’s preoccupation with muscling their way over rather than appreciating space and numbers out wide was mystifying. The torpor was eventually lifted on 53 minutes when Deegan zipped over under the posts, Byrne tagged on the extra points.

Within 60 seconds a substantial portion of the two benches had been introduced, all but guaranteeing that the fractured rhythm to the game would continue; and so it proved. Lyon lost a third player to a yellow card, right wing Xavier Mignot to a yellow card, Leinster capitalising from a lineout maul as replacement hooker Seán Cronin crossed unopposed. Byrne maintained his 100 per cent accuracy from the tee.

Andrew Porter’s late try and Ciarán Frawley’s conversion was the final act in terms of scoring, allowing the home supporters to warm their hands one final time.