The Offload: In-form John Cooney must start against Scotland 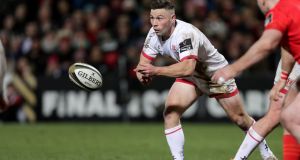 The Offload re-emerges full of hope for 2020. A positive slant is easily adopted by focusing on the supremacy of Leinster and Ulster over the holiday period rather than lingering over the atrocious collective and individual offerings by Connacht and Munster.

Max Deegan would be the unanimous winner - two tries, three try assists, 28 tackles, 21 carries for 71 metres - if Connacht’s resistance had not been so weak. This was a sorry stain on the whole idea of interpros in front of 18,300 full house at the RDS (the IRFU branches have copped on that people are going to attend these games regardless of personnel).

Despite Deegan’s performance he remains behind Caelan Doris - the best Irish performer over Christmas - Josh van der Flier and Rhys Ruddock in the Leinster backrow.

The winner has to be Jacob Stockdale. True, Sean Reidy and John Cooney got through more work in the mauling of Munster in Belfast but the man who would be crowned Ireland’s greatest ever winger, if every year was like 2018, is unquestionably returning to world class standards after a disappointing second season in the green jersey.

It wasn’t the 23-year-old’s 108 metres off seven gallops, which included a trademark intercept try, rather the multiple signs that his questionable defensive attitude during the Rugby World Cup will not reappear; twice he man handled opposition winger Dan Goggin.

Stockdale’s return to form is timely.

“Some people don’t like that really intense environment where every mistake you make in training or in meetings or anything like that is scrutinised. Players react differently. I think going forward [IT’LL BE]a more relaxed environment, less intense. Every player is going be able to express themselves a bit more.” Dave Kearney on life in the new Ireland camp under Andy Farrell.

28 - tackles made by Leinster’s Ross Molony and Connacht’s Niall Murray on his debut.

Has the penny dropped yet? John Cooney can do no more. Every game this season the Ulster scrumhalf - via the less travelled roads of Leinster and Connacht - has produced a try or kick to put his team on the road to victory.

Retrospect is easy but ignoring his form and reducing him to fourth choice Ireland scrumhalf last summer shows how misguided 2019 became down in Carton House. Cooney’s response to such crushing disappointment is the mark of the man. And to think he wasn’t a place kicker - in the strictest sense - until moving to Belfast.

“If you had told me five years ago that I would even take a place kick in professional rugby I wouldn’t have believed you,” he tweeted. “To now go on and reach 500 points with Ulster is crazy. What your mind believes it can achieve.”

At this stage it would defy all logic and evidence if the 29-year-old didn’t make his first Six Nations start against Scotland - the land of his father - on February 1st at the Aviva stadium.

He may as well kick and let Joey Carbery, Johnny Sexton or both focus on all the other tasks.

Pat Lam delivered a Pro12 title in 2016 because he was allowed to be creative in recruitment. Connacht’s lack of progress since has been stark.

Andy Friend is not a seeker of excuses but he knows what he inherited in Connacht. He also knows certain aspects of how the Irish rugby family is organised will never change but there remains a group of talented yet underused players, mostly from the Leinster system, entering their mid-20s, languishing in other provincial squads or playing amateur club rugby.

There are many examples. Two years ago Mark Flanagan (30) was with Saracens. Last Saturday he started for Lansdowne against City of Armagh in the Bateman Cup alongside 21-year-old Leinster hooker Dan Sheehan.

No official help is coming this season as the other provinces struggle to cope with the Rugby World Cup turning the entire campaign into a 13 month marathon but Friend’s recruitment before next summer - or who the IRFU allow him to approach - is crucial to the next step Connacht will or will not take.

“It is hard getting players,” said Friend, “it is hard and that is why we have delved into our academy.

“From a Connacht point of view we want home-grown players, we do, but at the same time, we’re realistic and we know we don’t have the depth that is up [IN DUBLIN]. So if we can get a sprinkling of other quality players who want to play some football, get minutes in the Pro14 and Champions Cup, the more [THE PLAYERS] are spread the better it is.”