The Offload: Ireland to break the glass ceiling in 2023 - take it as read 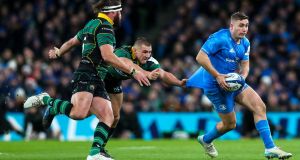 Jordan Larmour was named man of the match in Leinster’s win over Northampton in Dublin. Photograph: Ryan Byrne/Inpho

The Future is Air Jordan

Maybe we should just enjoy the now. See the positive not the negative.

Students of history cannot think this way. This almost always happens after World Cups. Players who - in retrospect - should have been fast tracked shine so brightly in the subsequent months and years that they can even end up touring with the British and Irish Lions.

We are mainly talking about Caelan Doris, Jordan Larmour, John Cooney and Andrew Porter. Just like the brakes put on Jamie Heaslip, Rob Kearney, Stephen Ferris, Tommy Bowe and Luke Fitzgerald in 2007, this foursome were underused in 2019.

The coaches should know who deserves to be playing better than the public. You have to wonder though. Granted, Jack Conan and CJ Stander had more credit in the bank than Doris (until now) but Cooney’s early exclusion from the misadventures of Japan increasingly feels like poor judgment while the bit parts Larmour and Porter were reduced to are bordering on the ridiculous.

We see now that Larmour the fullback was more than ready to light up the 2019 World Cup.

Oh well. Positive slant: a heap of talent is coming through the provincial ranks with Doris at the front of the next wave (Larmour is more of a tsunami) with Munster A’s visit to Donnybrook last Friday showcasing a few men with untold potential. We are talking about Munster backrow Jack O’Sullivan, scrumhalf Craig Casey and their South African prop Kenyon Knox.

Scott Penny’s push up the blue ranks will be stalled until Josh van der Flier is wearing a green jersey but alongside Jack Aungier and Dan Sheehan the possibilities in this new World Cup cycle are limitless.

You heard it here first, Ireland to break that glass ceiling in 2023.

Take it as read.

“Probably delegate more and do less is the key to any success really.” - Leo Cullen on the secret of coaching.

Saracens cannot fully enter this discussion, for obvious reasons, but the Champions Cup has a clear and increasing problem when it comes to English clubs. The Premiership is so obviously the priority over European rugby. Team selections in December - even the second string that Saracens sent to Limerick - prove as much. Northampton and Harlequins all but took a knee in Dublin and The Stoop as their domestic Christmas fixture list demands international players were rested.

It all combines to lessen the value of what is supposed to be the Northern Hemisphere’s primary tournament.

Leinster beat Northampton 93-37 over two Saturday meetings. Exeter did come close to Leo Cullen’s men in 2017/18 only to fall short against what Saints coach Chris Boyd compares to a Test match line-up.

“What’s interesting,” said Boyd, “is when we played Leinster last week only two of their players had played the week before so it’s their ability to rest and rotate and regenerate, keep their players fresh. With the Premiership it is just a slog.”

Wales and Northampton outhalf Dan Biggar, who knows better than anyone how to beat Ireland in Test matches, was asked how Leinster would fare in Europe if they had to cope with the same Premiership “slog.”

“That’s very much above my pay grade,” he replied, “but the Prem is why I moved to this club. Packed houses and competitive games every single week. Your squad is tested week in week out with relegation.”

And there is, ahem, a salary cap.

236 - metres covered by Jordan Larmour across the two Northampton games.

The Doctor and The Hooker

This column would never condone name calling but Saracens Director of Rugby Mark McCall surely knew his comments would force the EPCR to spill open a can of worms.

Here’s what we know. Saracens victory over Munster got a little heated on the touchline when visiting team doctor Jamie Kearns expressed frustration with Jamie George kicking the ball off Niall Scannell and into the Munster staff by apparently calling the England hooker a “fat p****.”

The subsequent melee - lots of muscle flexing - would have been the height of this minor incident but McCall stating that “a member of their staff said something horrible to one of our players” appears to have forced a formal investigation.

Dr Kearns has apologised to George and McCall. Does anyone need to be dragged over the coals? Unless we are missing something, a formal investigation seems a little over the top.

1 Lewis Ludlam eager to make his presence felt for England
2 Ireland to stick with winning formula against England
3 Wales cry foul over Furlong’s scrum technique
4 Should fans be allowed drink in the stand at sporting events?
5 Gerry Thornley: England primed to show their best against Ireland
Real news has value SUBSCRIBE