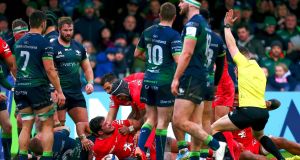 Connacht were given a stark reminder by French champions Toulouse of where they stand e in the European pecking order – worthy competitors, but lacking in depth and still prone to be outmuscled.

They head now to Montpellier for an irrelevant Pool Five game, pride rather than points at stake, but a Champions Cup victory is the aim.

“What’s important now is we do really need to try to get a win,” says coach Andy Friend. “We have to get a good performance out there on the park and let us go into the break with a winning formula and more confidence.

“We definitely belong here. That is the most important thing we have taken out of this, but we need to be better, to push to where we want to get to, which is knock-out games. We need to continue to work on our depth. We have had a lot of injuries, that’s fine, it provides opportunities, and that is not an excuse.”

Cue the recent announcement of €20 million Government funding for the new Connacht stadium, which Friend insists will have a positive knock-on effect on Connacht’s squad.

“It’s really important. Twenty million euros for a stadium will only be advantageous for rugby in Connacht. More people here to watch means there is then more money to spend on grassroots, which means more opportunity for us to grow Connacht-born players, who can come through and represent Connacht here at the Sportsground.”

The next part, he says, is to attract top-quality additions.

“We’ve done a good job this year of retaining a lot of the talent we’ve got. We are looking to sign some real quality to bring quality into the programme and that all helps us to do that.”

Once again Connacht Achilles’ heel resulted in a poor tally of points.

Sustained attacks inside the 22 resulted in nothing bar the opening try after 10 minutes when the pack won a succession of penalties as they marched towards the line – Gavin Thornbury having secured the lineout and Tom McCartney directing operations until referee Luke Pearce awarded the penalty try for Toulouse collapsing the maul, with a resultant yellow card for Joe Tekori.

Connacht’s Colby Fainga’a followed Tekori to the bin for a high tackle, and six minutes later Toulouse had tied the score, taking advantage of a penalty after Bundee Aki was adjudged to have gone off his feet at the breakdown.

From a series of drives, former All Black Jerome Kaino was given the try after referral to the TMO for a possible double movement.

There were some big moments for Connacht in defence – Tiernan O’Halloran’s work to prevent fullback Ramos scoring was a real sucker punch for the French outfit as Connacht regained the initiative, helped by a spark of genius from Jack Carty.

But the stalemate was broken just before the break – a Kaino turnover on his own 10 metre line was finished by hooker Julian Marchand for a 7-14 lead.

Although former Connacht player Pita Ahki bagged the easiest of scores after an attempted clearance from Carty was charged down, Connacht kept their hopes alive.

A delightful break from the outhalf provided Boyle with space and the flanker burst his way through but was tackled just shy of the line. Despite a second yellow and a red card, Toulouse held out, ending Connacht’s interest in the competition.

“We’re all disappointed,” says Friend. “The positive out of it, we had intent. We had 23 men who went out there and they gave us everything they had. In a weird way, probably too much intent, because we forced things and tried things that probably weren’t on.

“I think everyone realised we let something slip there. I thought we worked really hard, bodies in front, we went into collisions well, but our execution, our inability to be clinical, really hurt us there today, and we definitely let one go.”