The Offload: Connacht stay grounded as they fly to Toulouse 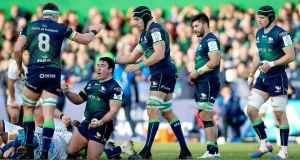 Want to know what Connacht, now deeply ensconced in the Andy Friend era, are all about, then listen to the genial Australian.

“Unlike most teams, we don’t charter flights so we’ll be leaving on Thursday afternoon, catching a flight on Friday morning and getting there in the afternoon,” said Friend of next week’s trip to Toulouse.

“It was interesting, I bumped into a Munster man this morning who was over at the Ospreys game and he was having a coffee at Knocknacarra coffee shop at 9.30am. I was thinking that we wouldn’t get back until 6pm.

“We don’t have the luxury of doing that but in a weird way, that’s actually what builds this team. It makes you have character. You’ve got to have character and get on with things and when things don’t go your way – like injuries leading up to a game – it doesn’t bother you.”

Sixteen injuries, including the loss of captain Jarrad Butler, Niyi Adeolokun and Matt Healy over the weekend, couldn’t stop the westerners muscling up to sort out a Montpellier side that included Aaron Cruden and the Du Plessis brothers.

This has to be Connacht’s greatest European victory, with their collection of journeymen and rejects from other places deserving to be lauded. Conor Fitzgerald, not Jack Carty, kicked the winning penalty.

Fitzgerald was cut by the Munster academy in 2018. Look at him now.

Paul Boyle (overlooked by Leinster) and Bundee Aki (nearly an All Black) also deserve special mentions but 18 tackles from Denis Buckley, a home-grown prop, was sensational. Buckley had to play the full 80 minutes. Unheard of these days but so is the lack of a chartered flight. Off to Toulouse they go. “We will have a red-hot crack at them.”

And then travel home with their fans.

How Gatland gets at Schmidt

Following a previous segment on “how not to sell an autobiography”, this week we focus on the art of promoting one’s memoir, ably assisted by Warren Gatland’s masterclass in media exposure.

First, Gatland hit the headlines with some juicy yet vague information about a possible doping case in Welsh rugby that never saw the light of day. Next, the former Ireland coach took us back to the days when he fell foul of what he still sees as a coup d’etat, seemingly spear-headed by assistant coach Eddie O’Sullivan and captain Keith Wood.

These were mere appetisers as there remains no love lost between Gatland and Joe Schmidt. “Joe Schmidt seems to get more wound up the week Ireland are playing Wales because if I say anything it absolutely drives him crazy,”Gatland told Joe Molloy on Off The Ball. “It does bother Joe. He might deny that but people within the Irish camp are telling me ‘Please don’t say anything this week, because Joe will go mental about any comments you make.’”

The Lions coach also warmed to the theory Ireland became too predictable under Schmidt. “[Ireland’s direct play off Conor Murray] was hard to stop and sometimes what happened, and it could have been me or Eddie Jones, you could talk Ireland out of playing that way.

“Egos would get the better of Ireland, and they’d try and play a different way and be more expansive. They sometimes did [change] to their detriment.”

“The injuries didn’t change it, honestly. Maybe it’s an Aussie thing, but I reckon you get those challenges and I quite like them.” – Connacht coach Andy Friend – Injury crisis, what injury crisis?

He equates “Sodom and Gomorrah” with Sydney in his latest sermon as “God rained fire and brimstone from heaven and destroyed that city because of the sin that they were living in.”

This really happened. The video is online.

“Look how rapid these bushfires, these droughts, all these things have come in a short period of time, do you think it’s a coincidence or not?” the former Wallaby and Rugby League superstar asked from his local church pulpit.

“God is speaking to you guys – Australia, you need to repent and take these laws and turn it back into what is right by God.”

Folau is not the best orator. He seems nervous, like Bambi in headlights.

“Just when you thought he couldn’t get any more controversial,” led Sky News in Australia.

“Folau says he is sharing the message out of love but suggests the worst is yet to come.”

What screams through his latest hate speech is that someone needs to check on the man’s mental well-being before he does serious harm to himself and others.

The wonder now is whether Billy Vunipola has the stomach to weigh in behind his fellow Christian or perhaps the Saracens and England player sees the logic of separating fame, sport and religion.