Business as usual for Leinster as they extend their perfect record 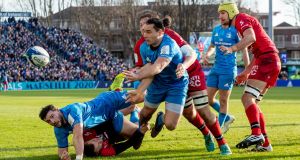 James Lowe of Leinster is tackled by Etienne Oosthuizen of Lyon during the Champions Cup round five clash at the RDS Main Arena, Ballsbridge, Dublin. Photograph: Morgan Treacy/Inpho

The result will be satisfactory, aspects of the performance perhaps less so, as Leinster recorded a fifth straight Heineken Champions Cup victory in this season’s tournament, scoring six tries in the process and maintaining their quest to be top seeds going into the final round of pool fixtures next weekend when they visit Treviso.

It was a fitful display, in front of 18,138 supporters on a perfect afternoon weather-wise at the RDS, individual excellence glossing over some sloppy patches in terms of the team dynamic, where bouts of passive defence, inaccuracy in the opposition 22 compounded by some questionable decision-making, denied the home side a more emphatic victory.

Lyon arrived without a host of first-choice players, lost three to yellow cards, yet still managed to score a couple of tries and only really disappeared from view when running out of energy in the final quarter.

Their spirit in defence deserves credit but if Leinster had been sharper then the disparity in quality between the teams would have been reflected on the scoreboard.

The stop-start nature of the game, three tries reviewed and at least two correctly disallowed by television match official Ian Davies, elongated scrum sets, and also time eaten up by injuries, militated against a flow to the game. Lyon were more grateful for those respites, and understandably looked to slow down proceedings when possible.

Leinster’s head coach Leo Cullen referenced the stoppages in his post-match summation. Overall he was pleased about the outcome while acknowledging some performance flaws.

“It was a tricky game. [We] scored six [tries], it could have potentially been more, but it is what we wanted out of the game, a win bonus-point and on we go. Overall we are pretty pleased.

“We looked a little bit edgy in the dressing room at half-time. At the start of the second half the players applied themselves well, started putting more pressure on Lyon, a bit more accurate in what we were doing. Lyon gave away a lot of penalties at that stage. There were a lot of stoppages in the game and we never got any real rhythm.

“[We were] forcing things a little bit and getting too complicated. We kicked the ball away cheaply when Lyon were down to 14 players. They played keep ball for a while. They are a big physical team, very heavy and once they got that rumble on they were hard to stop. We weathered the storm and got the job done eventually.”

There were several excellent individual displays from a Leinster perspective, man of the match and a try scorer Max Deegan, outstanding, while Garry Ringrose, Robbie Henshaw, Dave Kearney (two tries), Ross Byrne and Rhys Ruddock were others who glistened in the winter sunshine. The impact of the bench, increasing the tempo and offering a playing intelligence, helped the home side to enjoy a more comfortable end game.

Leinster had two tries chalked off in the first half, Luke McGrath was correctly pinged after straying in front of Dave Kearney’s beautifully weighted chip, the second a knock-on in the build-up to Scott Fardy’s effort, less obvious, and with the suspicion that it had gone forward off a Lyon player. An unwanted hat-trick of disallowed tries, James Lowe’s one-handed offload to Josh van der Flier drifting forward.

The home side will be disappointed that they weren’t more precise and ruthless in finishing off some excellent approach play and the occasional passivity in defence that allowed a gutsy Lyon side to rumble forward on the rare occasions that they had possession. Time and again Leinster players breached the Lyon defence but lacked sufficient support structures to register scores.

Leinster did manage three tries in the opening 40-minutes, a brace from Dave Kearney and another from Josh van der Flier, Lyon responding with a couple of their own, the first following an intercept capitalised upon by number eight, Virgile Bruni, the second, from Hendrik Roodt, down to pure power as the home side’s discipline temporarily let them down, conceding a couple of quick-fire penalties that allowed the French side access to the Leinster 22.

Lyon would have been hugely encouraged by their 21-14 interval deficit and the fact that their second try came at a time when they were down to 14 players with centre Ethan Dumortier in the sin bin. The French side continued to infringe, replacement Felix Lambey the next player to get a 10-minute sabbatical.

There were occasions when the home side’s preoccupation with muscling their way over rather than appreciating space and numbers out wide was blinkered and difficult to fathom. On 53-minutes Deegan zipped over under the posts for a try, Ross Byrne tagged on the extra points, as Leinster picked up the tempo.

Within 60 seconds a substantial portion of the two benches had been introduced, all but guaranteeing that the fractured rhythm to the game would continue; and so it proved. Lyon lost a third player to a yellow card, right wing Xavier Mignot on 63 minutes, Leinster capitalising from a lineout maul as replacement hooker Sean Cronin crossed unopposed. Ross Byrne maintained his 100 per cent accuracy from the tee.

A couple of replacements combined as the home side finished with a flourish. Andrew Porter’s muscular finish from close range and Ciaran Frawley’s conversion were the final acts, in terms of scoring, allowing the home supporters to warm their hands one final time.